SpaceX Gets Taker For First Flight Of Recycled Rocket

Since December, SpaceX has recovered six boosters following liftoff, landing them upright on an ocean barge or back at Cape Canaveral Air Force Station. 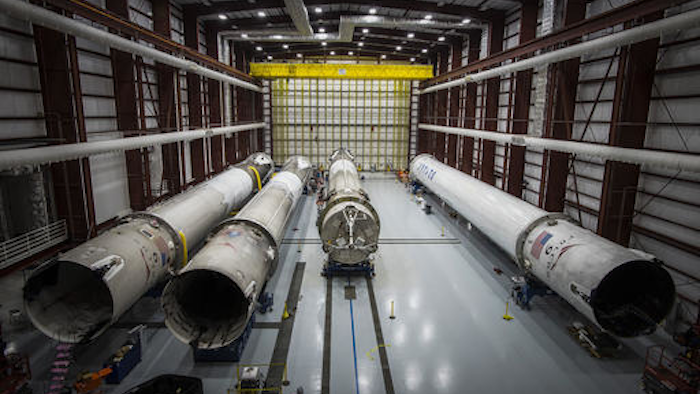 This June 6, 2016 photo made available by SpaceX shows recovered Falcon rocket boosters in a hangar at the Kennedy Space Center on Merritt Island, Fla. (SpaceX via AP)

SpaceX has a taker for the first flight of one of its recycled rockets.

The Luxembourg-based company SES — a longtime SpaceX launch customer — said Tuesday it will send its next communications satellite up on a previously flown Falcon rocket. It will be the first true reuse of a rocket previously used for an orbital mission. The launch will take place sometime this fall from Cape Canaveral.

"Thanks for the longstanding faith in SpaceX," SpaceX chief Elon Musk said via Twitter. "We very much look forward to doing this milestone flight with you."

The chief technology officer at SES, Martin Halliwell, said SpaceX's testing for the upcoming mission gives his company "full confidence." SES was the first commercial satellite operator to launch with SpaceX, back in 2013, he noted, and the satellite operator is excited to team up with SpaceX for another first.

"We believe reusable rockets will open up a new era of spaceflight," Halliwell said in a news release.

SpaceX said it can save considerable time and money by reusing the big, expensive parts normally left to sink at sea.

The first-stage, 15-story rocket — equipped with nine engines — is what launches everything to space. It separates 2 1/2 minutes after liftoff, and the second stage takes over to get the payload into the proper orbit. This second stage, for now anyway, is still discarded. 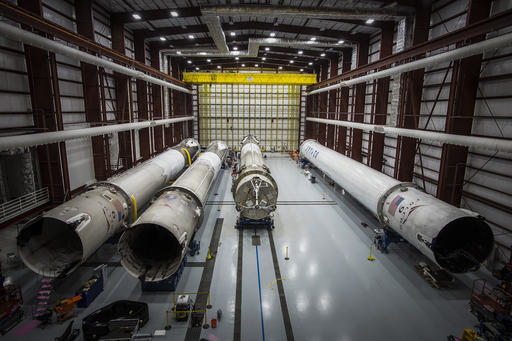 This June 6, 2016 photo made available by SpaceX shows recovered Falcon rocket boosters in a hangar at the Kennedy Space Center on Merritt Island, Fla. (SpaceX via AP)

Since December, SpaceX has recovered six boosters following liftoff, landing them upright on an ocean barge or back at Cape Canaveral Air Force Station. It hopes to expand its Florida inventory this weekend, as it attempts to launch an Israeli communications satellite.

SpaceX's single attempt to land a leftover booster launched from California, back in January, failed.

The first recovered booster now stands outside the company's Southern California headquarters. The one used in a space station supply run for NASA in April will be used in the fall SES flight.

Another private space company, Blue Origin, has been reflying a recovered rocket from Texas for months but these have been suborbital test flights.