The Mystery Of The Hitomi Satellite Is Finally Solved

In March, a Japanese satellite designed to teach us about some of the most mysterious forces in the universe was brought crashing down to Earth. 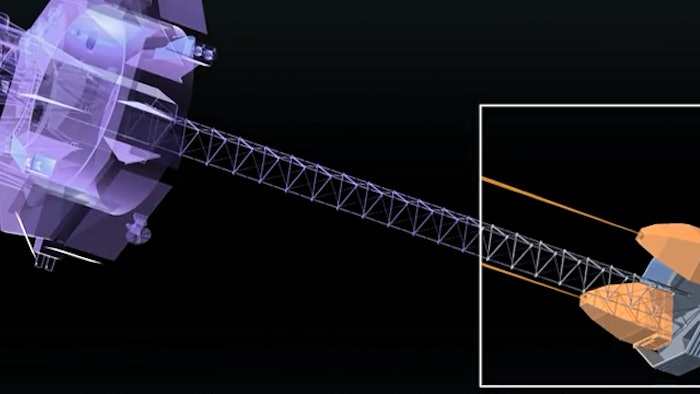 The Extensible Optical bench, which extended the satellite to its full length, was one of the parts JAXA flagged as likely to come apart during high-speed rotation. (Image credit: JAXA)

In March, a satellite designed to teach us about some of the most mysterious forces in the universe was brought crashing down to Earth. Hitomi, or ASTRO-H, launched by the Japan Aerospace Exploration Agency (JAXA) on Feb. 17, was discovered to have broken into several pieces on March 26. After scrambling to find out what had happened to the mission, which included contributions from the United States and eight other nations, JAXA named the satellite a lost cause.

It turns out, the loss of the satellite came from a combination of a software update and a cosmic-scale communication problem. Hitomi monitors and controls its altitude using two instruments, the Inertial Reference Unit (IRU) and a star tracker (STT). At the time the problems started, it was rotating, getting into position to observe the galaxy Markarian 205. It appears that the STT output data was never uploaded, meaning that the IRU was operating using false information. IRU attempted to correct what it judged was an unexpected rotation.

The IRU kept trying to correct for movement that wasn’t actually happening, eventually using its thrusters to rotate at a rate that exceeded the physical limitations of the solar panels and the Extensible Optical Bench, a platform for X-ray detectors used in the satellite’s observations. The optical bench allowed the satellite to stretch its instruments to its further length, six meters. These might have been part of the initially observed debris.

Adding to this was the fact that the satellite was travelling through the South Atlantic Anomaly, an area of unusually strong radiation where the Van Allen belt passes just 124 miles above the Earth. It’s possible that if the problem had started while the satellite had been in communication with the ground instead of in this blackout zone, its course might have been corrected.

Hitomi was launched from Tanegashima Space Center on an H-11A F30 rocket. It cost $286 million for the spacecraft bus and instruments, which included a new type of generation sensor called a microcalorimeter and high-efficiency semiconductors made in Japan.

“ASTRO-H has unprecedentedly high spectral resolution, coupled with high sensitivity over a very wide range of energies. These outstanding abilities will enable it to reveal the dynamic structures of galaxies and galaxy clusters for the first time ever, as well as conducting research on hidden massive black holes and the unknown nonthermal particle acceleration mechanisms in supernovae remnants,” project manager Takahashi Tadayuki said of the satellite before it was launched.