Colorado will use the NASA data to improve computer modeling for runoff forecasts. 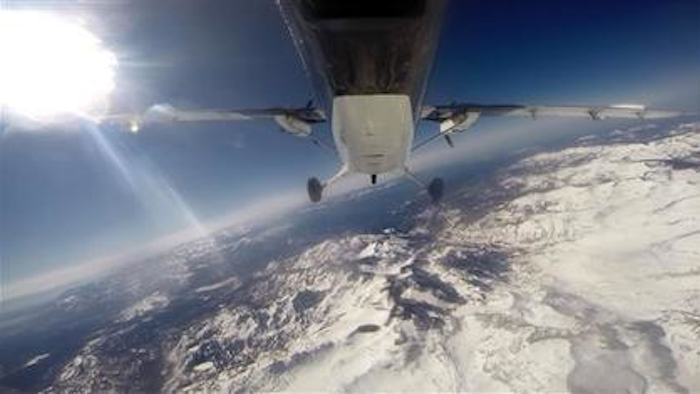 NASA is providing drought-stricken California with valuable data about how much water is locked up in the scant Sierra Nevada snow, and now Colorado is trying the technique in the mountains where the Rio Grande begins its journey to New Mexico and Texas.

An airplane called the Airborne Snow Observatory flies over California's Tuolumne River Basin east of San Francisco during peak snow months, using scanners to collect data on how deep the snow is and how much of the sun's warming rays are bouncing off. That helps project when the snow will melt and how much water it will release into rivers for cities, farms and wildlife.

That's critical information in the West, where researchers say 75 to 80 percent of the water comes from melting mountain snow. It helps reservoir managers decide how much water to release into turbines to generate electricity and how much to hold for dry months. It also helps determine who gets irrigation water and who doesn't in a rigid pecking order of water rights.

"Once the water managers get a look at the data they say, 'I like that,'" said Frank Gehrke, chief of the California Cooperative Snow Surveys Program. NASA has been providing California with snow data from the Tuolumne Basin since 2013, and flights will resume there next spring.

Colorado signed up for three flights over the Rio Grande Basin in the south-central part of the state. The first were in March and September of this year. The third will be next spring.

Melting snow from the basin — flanked by the towering San Juan and Sangre de Cristo mountains — forms the Rio Grande, which flows south through New Mexico and then southeast to the Gulf of Mexico, forming the Texas-Mexico border.

Interstate compacts guarantee Texas and New Mexico a share of the water, so Colorado has to choose carefully when deciding how much to send downstream and how much to allocate for local use.

Estimating how much Colorado snow will melt into the Rio Grande is difficult. The mountains block weather radars that could help gauge how much precipitation is falling, said Joe Busto of the Colorado Water Conservation Board.

Colorado will use the NASA data to improve computer modeling for runoff forecasts.

"If you give it lots of wonderful data. It will outperform the old models," Busto said.

The plane has also surveyed the Uncompahgre River Basin in western Colorado for a research project and other areas to map flood plains.

California pays about $400,000 a season for weekly flights over the Tuolumne Basin during peak snow months, Gehrke said. Colorado is paying about $300,000 for the Rio Grande basin data, Busto said.

Tom Painter, NASA's principal investigator for the project, said it's a good investment because the projections are so accurate. Snowmelt flowing from the Tuolumne Basin into Hetch Hetchy Reservoir was within 2 percent of projections from the NASA data in 2013 and 2014, he said.

Most of the airborne surveys have been during drought, but Painter said they'll be useful in wet times to help regulate heavy runoff.

The Airborne Snow Observatory, a propeller-driven plane, sweeps back and forth over mountain snowfields scanning with lidar — the term combines "light" and "radar" — and an imaging spectrometer.

Lidar measures snow depth by bouncing a laser off the surface and comparing that to an aerial survey done without snow. Coupled with snow density data from ground sites and computer modeling, researchers can project how much water is in the snow.

The spectrometer measures how much sunlight the snow is reflecting and absorbing. That allows researchers to project when it will melt.

The ground sites, scattered across the West, are the primary source of data for most snowmelt projections. U.S. Department of Agriculture employees trek to some sites to measure and weigh the snow. Other sites are automated.

Painter said the airborne survey won't eliminate ground sites, but he foresees a day when aerial surveys become the standard. Satellites might also play a role, but airplanes can provide a level of detail and frequency that spacecraft cannot, Painter said.