NASA finally announced what it billed as a “major” finding over the weekend. 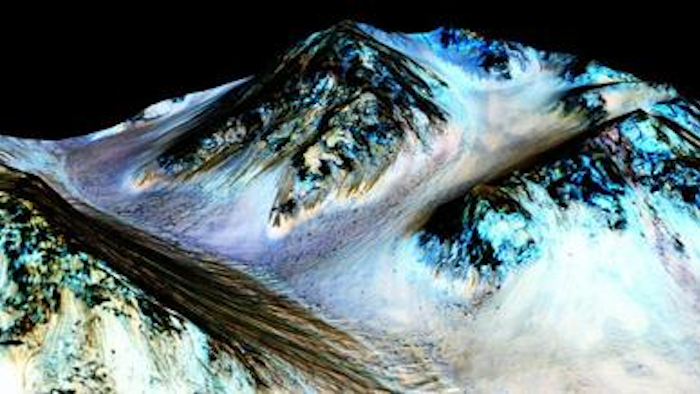 Today, NASA finally announced what it billed as a “major” finding regarding a certain Mars mystery.

The mystery: Does the Red Planet have water on its surface?

According to new research published in Nature Geoscience, yes — liquid water does exist on Mars during the planet’s warmer seasons.

This news comes from spectral data collected by NASA’s Mars Reconnaissance Orbiter (MRO). From the collected images, researchers were able to discern that the dark recurring streaks across the planet’s surface appear to ebb and flow over time.

These narrow, 100-meter-long streaks darken and flow down in the warm seasons, while fading in cooler seasons.

“Our quest on Mars has been to ‘follow the water,’ in our search for life in the universe, and now we have convincing science that validates what we’ve long suspected,” said John Grunsfeld, astronaut and associate administrator of NASA’s Science Mission Directorate in Washington.

Although the water on Mars isn’t exactly like the water on Earth (it’s much more briny), this discovery represents a landmark finding that makes the idea of life on Mars more plausible. Any fresh water on Mars, for instance, would freeze, thus killing any organisms living in it.

According to the researchers behind the Nature Geoscience study, “The presence of liquid water on Mars today has astrobiological, geologic and hydrologic implications and may affect future human exploration.”

“It took multiple spacecraft over several years to solve this mystery, and now we know there is liquid water on the surface of this cold, desert planet,” said Michael Meyer, lead scientist for NASA’s Mars Exploration Program at the agency’s headquarters in Washington. “It seems that the more we study Mars, the more we learn how life could be supported and where there are resources to support life in the future.”