Japan also sent up 12 mice aboard as part of an aging study. 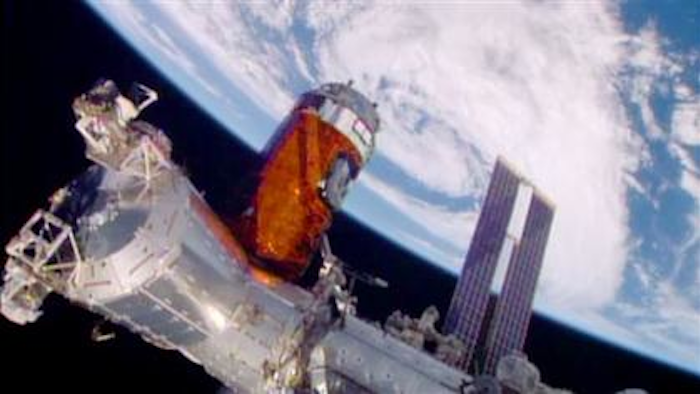 Spirits arrived at the International Space Station on Monday. Not the ghostly ones, but the kind you drink — distilled spirits.

A Japanese company known for its whiskey and other alcoholic beverages included five types of distilled spirits in a space station cargo ship. The station's big robotic arm — operated by Japanese astronaut Kimiya Yui — grabbed onto the supply craft launched Wednesday by his homeland. Flight controllers helped anchor it down.

The supply ship contains nearly 10,000 pounds of cargo, including the six liquor samples. Suntory Global Innovation Center in Tokyo wants to see if alcoholic beverages mellow the same in space as they do on Earth.

The samples will spend at least a year in orbit before being returned to Earth. An identical set of samples will be stored on the ground in Japan.

The experiment has NASA's blessing. Spokesman Dan Huot said all research flown to the space station is agreed upon by everyone involved. It's not the first liquor-related space study.

Japan also sent up 12 mice aboard the Kounotori vessel, Japanese for white stork, as part of an aging study.

NASA has considerable equipment aboard the supply capsule. Many are replacements for items lost in the failed SpaceX supply run at the end of June. The Florida launch accident destroyed everything on board. The replacements include spacewalking equipment, an emergency breathing kit, toilet wiring and parts for the water recycling system.

The 250-mile-high outpost with six residents was in need of fresh supplies, after losing three shipments in eight months. SpaceX remains grounded, as does another U.S. supplier, Orbital Sciences Corp., which suffered a launch explosion last October in Virginia. A Russian cargo ship went out of control in April and was destroyed on re-entry, but the country has since corrected the problem and resumed deliveries.

U.S. astronaut Scott Kelly — who last week said the delivery was "very important" given the circumstances — welcomed the stork.

"Great job by my crewmates," Kelly said via Twitter.