The first Pacific leg is the riskiest because there is no place to land. 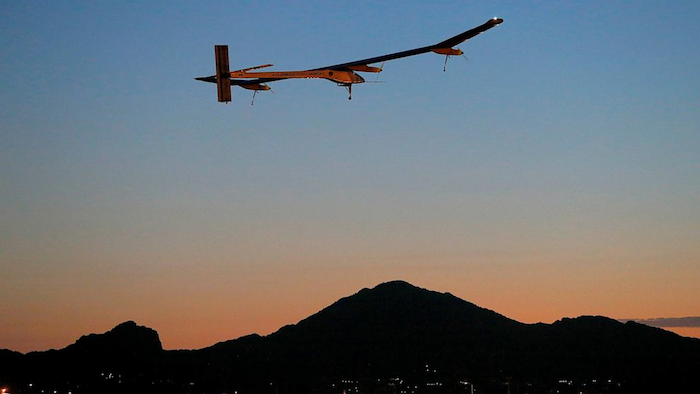 A solar-powered plane delayed by weather and repair work is ready to resume its around-the-world journey, set to leave central Japan for Hawaii early Wednesday if conditions permit.

Swiss pilot Andre Borschberg is flying the plane solo during the roughly five-day trip. He plans to take short naps, do yoga and meditate to endure the lack of sleep.

"As a pilot you learn not to sleep when you fly. I needed time to accept that I could sleep and I could trust what the airplane was doing," he told reporters in Tokyo last week.

The airplane carries no fuel, so project engineers are using simulations to determine when it is safe to fly. The first Pacific leg is the riskiest because there is no place to land.

Borschberg had been waiting for a weather front stretching from Alaska to Taiwan to clear enough for him to leave the central Japanese city of Nagoya. He landed there on June 1 due to weather worries between Nanjing, China, and Hawaii — at 8,175 kilometers (5,079 miles) the longest leg of the round-the-world journey which began in Abu Dhabi.

The length of the journey means that the weather forecasts the project's simulators use to decide if it is safe to embark are at their limits of reliability, he said.

"We don't want to take too much of a risk," he said. "Either the airplane is still flying and it gets to where it is going, or it's in the water and it's a failure. It's either 100 percent or 0 percent. There is no 50 percent. That is why we are so careful."

"I will really believe in this window to Hawaii when I will have crossed the point of no-return!" Borschberg tweeted on Tuesday.

On the ground in Nagoya, the plane was slightly damaged when a cover was tousled by the wind, but it has been repaired and ready to go for days.

The project's leader and co-founder, Bertrand Piccard, will be guiding Borschberg from a control center in Monaco. They are taking turns flying the plane solo.

The Solar Impulse 2 is powered by more than 17,000 solar cells on its wings that recharge its batteries, enabling it to fly. But bad weather and nights are challenges because diverting around clouds takes extra energy, and the aircraft is not designed to withstand rain, turbulence and heavy winds.

The aircraft travels at about the same speeds as a vehicle. At night, it descends from its maximum altitude of 8,500 meters (27,887 feet) to 3,000 meters (9,850 feet) to minimize power consumption as it draws from its batteries.

In the morning, the plane resumes producing power, but it needs to have enough left-over power to ascend to the daytime altitude.

To accommodate the plane's wide wingspan, the Japanese Transport Ministry and Nagoya airport officials arranged for Solar Impulse to land and take off after the airport's usual closing hours.

The Solar Impulse project is meant to demonstrate the potential of improved energy efficiency and clean power, though solar-powered air travel is not yet commercially practical, given the slow travel time, weather and weight constraints of the aircraft.