Here are five innovative technologies that stood out at this year's Paris Air Show. 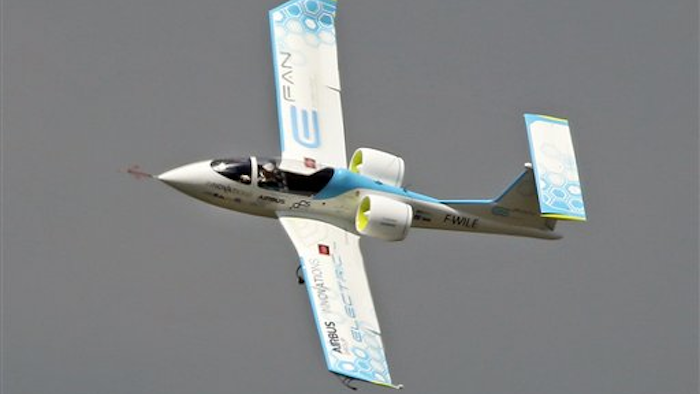 Planes you can park in your garage. Satellites that fit in your backpack.

Some of the coolest experimental technology showcased at this week's Paris Air Show is about thinking small — though it's easy to get distracted by the huge aircraft performing overhead, from thundering fighter jets to the surprising near-vertical liftoff of a Boeing passenger jet.

These innovative ideas may change the way we travel, wage wars or explore space. Here are five that stood out at this year's show, which runs through Sunday:

Sick of traffic-clogged commutes or island-hopping via slow ferries? Travelers may soon be able to fly their own single-seat private jet, small enough to fit in a garage.

Polish company Metal Master showcased its single-engine Flaris jet, an experimental plane that weighs just 700 kilograms (1,540 pounds), less than half of an average car. It's about the size of a car but rings up at 1.5 million euros ($1.7 million).

Test pilot Maciej Peikert said the company expects the jets will "commute between areas where the infrastructure is relatively poor, or between islands or in mountains."

The plane's glass cockpit fits a single pilot and it flies below the normal cruising height of regional commercial altitudes. It requires no more than a 600-meter (650-yard) grass airstrip to take off.

Many companies are working on similar models, but few have begun making deliveries. Aircraft companies including Cessna and Eclipse, both in the United States, and Brazil's Embraer have released small jet aircraft onto the market.

Putting The 'Lite' In Satellite

Sometimes it pays to be small: At a tenth of the cost of their larger counterparts, nanosatellites from the University of Montpellier weigh as little as a kilogram (2.2 pounds) and can reach otherwise inaccessible places.

The student-built nanosatellites cost up to 300,000 euros ($340,000) each, in contrast to large satellites that go for hundreds of millions.

Commercial nanosatellite developers and manufacturers include Surrey Satellite Technology Ltd., a spinoff of the British University of Surrey, and California's Planet Labs Inc.

Montpellier's Space Center and nanosatellite program receives support from the Van Allen Foundation so students can collaborate with researchers and industry professionals to build the miniature devices. So far, scientists have launched nanosatellites to monitor places like the Andes to better understand global warming.

The Tesla Of The Sky

Airplanes have a sizeable carbon footprint — but Airbus is trying to change that, developing aircraft models with zero carbon dioxide emissions.

Its E-fan plane is fully electric — using no oil or water — instead operating exclusively on batteries that pilots can recharge within an hour.

The focus on models kinder to the environment is on trend, especially considering that the air show's venue Le Bourget will host the U.N. Climate Conference this November. Boeing, Airbus' primary competitor, is also working on creating greener aircraft models, collaborating with NASA on experimental hybrid electric designs.

For now, Airbus is only building these E-Fan jets for entry-level pilot training — the two-seater should go on the market in 2017 — but eventually the aircraft manufacturer is aiming bigger, said Chief Technical Officer Jean Botti.

"Our objective here is to make a hybrid-electric 100-seater" in the next 15 years, Botti said.

After its February jaunt into space, the Intermediate Experimental Vehicle (IVX) was back on solid ground at the air show to boast of its successful flight.

The European Space Agency (ESA) built the spaceplane to gain insight into developing vehicles that could safely leave and re-enter the atmosphere — a potentially less expensive means to explore space. Researchers are experimenting with technologies that involve new vehicle flaps and thrusters to better control flight patterns and new thermal protection materials.

After a 100-minute journey that included 18 minutes in sub-orbit earlier this year, the IVX descended 8,000 kilometers (4,800 miles), broke through the atmosphere, and dove safely into the Pacific Ocean with the help of a parachute.

NASA is also experimenting with re-entry vehicles that use an inflatable heat shield to slow and protect the vehicle.

One American company thinks pilots should operate their cockpit controls as they might their smartphone, with a simple swipe of the finger.

Esterline displayed their all-glass cockpit, featuring an open architecture touchscreen, for military and light attack planes. The company said the screens can help pilots track of critical data, allowing them to tailor their views and streamline intelligence-gathering.

The screens can make it easier for pilots to avoid losing their lunch, said company marketing vice president Steven Luys.

"With a single touch of your finger, you can basically take the route and reroute your airplane to avoid this area of turbulence, just like that," he said.

And a final bonus: Boeing's 787 Dreamliner did an encore performance of its near-vertical takeoff Monday, dramatically lifting its 200-foot (61-meter) frame into the sky with acrobatic grace.

It was the kind of move more often associated with roller coasters than airplanes, and had passengers been aboard they surely would have felt queasy. But the maneuver has made the plane an Internet sensation, garnering more than 9 million YouTube views.