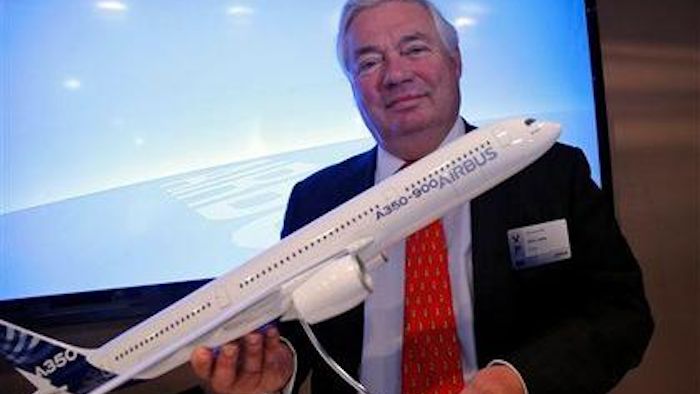 The informal orders race between the European and American plane makers kicked off with a firm order for 60 single-aisle Airbus jets — worth $6.6 billion at list prices — and ambitious promises from Indonesia's flagship airline Garuda to buy 90 jets from both Boeing and Airbus in the years to come.

French President Francois Hollande inaugurated the 51st edition of the world's oldest air show with hopes for big contracts for home team Airbus — based in the southern French city of Toulouse — and an appeal for fuel savings, as his country prepares to host a major U.N. climate conference later this year.

"The aviation sector created 10,000 jobs last year, we have hopes to create nearly as many in 2015," Hollande said at the Le Bourget airfield outside Paris, with bomber jets screaming overhead.

The memory of recent plane crashes remained fresh for some participants. Airbus Defense and Space made a point of flying its A400M military plane overhead — and landing it safely — to show confidence in the European jet program after a deadly crash last week near Seville, Spain

Airbus says three of the four engines on that planed failed before it crashed, killing four people. Four of the five countries that have A400Ms grounded the plane after the incident.

John Leahy, Airbus' chief operating officer for customers, projected the very large aircraft segment would grow to about 1,500 planes over that span — mostly passenger planes. He said Airbus currently holds about a 90 percent market share in that segment, which is also inhabited by the decades-old Boeing 747.

He said travelers and airlines would be better off if larger aircraft were used instead of smaller planes flying more often, noting how he flew an Airbus jet from Toulouse to Paris for the air show and another one was leaving about a half-hour later.

"I would humbly suggest that everybody would better off if those two flights ... could be combined into a bigger aircraft," Leahy told reporters. He also mentioned possible benefits of saving fuel by flying passengers on fewer, larger flights.

Boeing, meanwhile, is betting on smaller wide-bodies such as the 787. Boeing's overall forecast for the next 20 years is for 36,770 aircraft worth $5.2 trillion, with single-aisle planes the fastest-growing, largest overall segment.

Both Airbus and Boeing are seeing sustained high demand for single-aisle planes at the air show, driven by demand in developing countries and by low-cost airlines.

Fuel-efficient planes are expected to remain popular among airlines despite lower oil prices this year. Analysts expect about 300-400 plane sales overall, lower than previous years in part because no major new jets are on the market.

Garuda Indonesia signed a letter of intent for up to 60 Boeing jets — 30 of the popular single-aisle 737 MAX and 30 of Boeing's 787-9 planes. They would cost $10.8 billion at list prices if confirmed, though customers routinely negotiate discounts.

Garuda also put in a provisional order for 30 wide-body A350 jets, worth about $9 billion, which could serve routes from Jakarta or Bali to Europe.

Asian carriers are expected to dominate global aircraft demand over the next two decades, with Boeing estimating that roughly two out of every five new planes will head to Asia.

Leading U.S., Russian, European and Mideast military officials are also attending the show, expecting some 300,000 visitors from the public and the $700 billion aerospace and defense industry. It opens to the public Friday and runs through June 21.