Blast off! The MUOS-3, a Lockheed Martin-built Navy communications satellite, is expected to launch from the Cape Canaveral Air Force Station tonight. It will head into orbit aboard a United Launch Alliance Atlas V rocket. MUOS-3, the third Mobile User Objective System (MUOS) satellite, is designed... 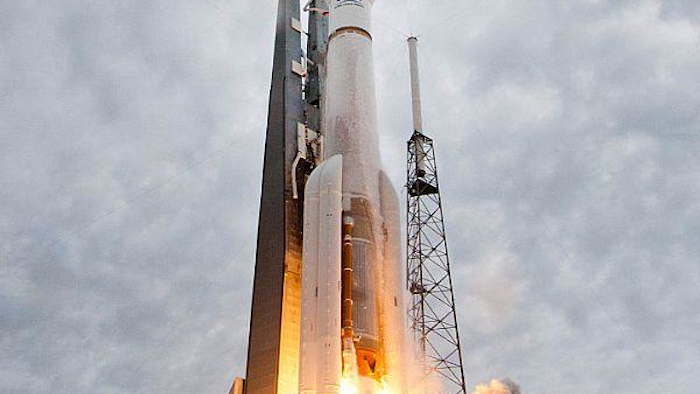 Blast off! The MUOS-3, a Lockheed Martin-built Navy communications satellite, is expected to launch from the Cape Canaveral Air Force Station tonight. It will head into orbit aboard a United Launch Alliance Atlas V rocket.

The satellite was built at Lockheed Martin’s Sunnyvale, Calif. manufacturing facility, then shipped to Cape Canaveral Air Force Station on Nov. 5 and encapsulated into its launch fairing on Dec. 18.

Once fully operational, MUOS will provide 16 times the capacity of the legacy system. More than 50,000 terminals that are in the field today can be retro-fitted with WCDMA.

“The launch of MUOS-3, and the near-term certification of our fourth and final Radio Access Facility, brings us to the brink of the global coverage we anticipate for MUOS communications. This government and contractor team knows how important this capability is for our protectors in harm’s way,” said Iris Bombelyn, vice president of Narrowband Communications at Lockheed Martin. “To deliver a satellite like MUOS is no small task and the team worked around the clock and through every holiday. We are honored to do so, because we know that our warfighters never stop in their own mission to keep us safe.”

Lockheed Martin is a global security and aerospace company based in Bethesda, Md., and is principally engaged in the research, design, development, manufacture, integration and sustainment of advanced technology systems, products and services. The Corporation’s net sales for 2013 were $45.4 billion.

The launch of MUOS-3 can be viewed through a live broadcast, which begins at 7: 23 p.m. EST. It is presented by the United Launch Alliance webcast, accessible at http://ow.ly/HrRtx.