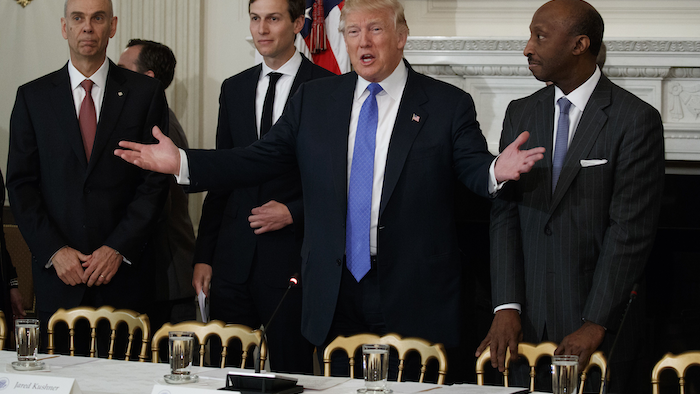 Yet some of the CEOs suggested that there were still plenty of openings for U.S. factory jobs but too few qualified people to fill them. They urged the White House to support vocational training for the high-tech skills that today's manufacturers increasingly require — a topic Trump has seldom addressed.

"The jobs are there, but the skills are not," one executive said during meetings with White House officials that preceded a session with the president. (Reporters were permitted to attend the meetings on the condition of not quoting individual executives by name.)

The discussion of job training and worker skills is a relatively new one for Trump, who campaigned for the White House on promises to restore manufacturing jobs that he said had been lost to flawed trade deals and unfair competition from countries like Mexico and China.

Again and again, Trump brought up that theme in his meeting with the CEOs.

"Everything is going to be based on bringing our jobs back," Trump said. "The good jobs, the real jobs. They've left."

White House officials said Trump heard the CEOs' concerns about a shortage of qualified workers and said he supports efforts to increase training for factory jobs. But they didn't provide details.

"We were challenged by the president to ... come up with a program to make sure the American worker is trained for the manufacturing jobs of tomorrow," Reed Cordish, a White House official, said after Thursday's meetings.

Trump officials said the meetings were intended to provide the White House with ideas in four areas: taxes and trade; regulatory reform; infrastructure; and the "workforce of the future," including advanced training. Proposed solutions may be included in future presidential executive orders or legislative proposals, a White House official said. 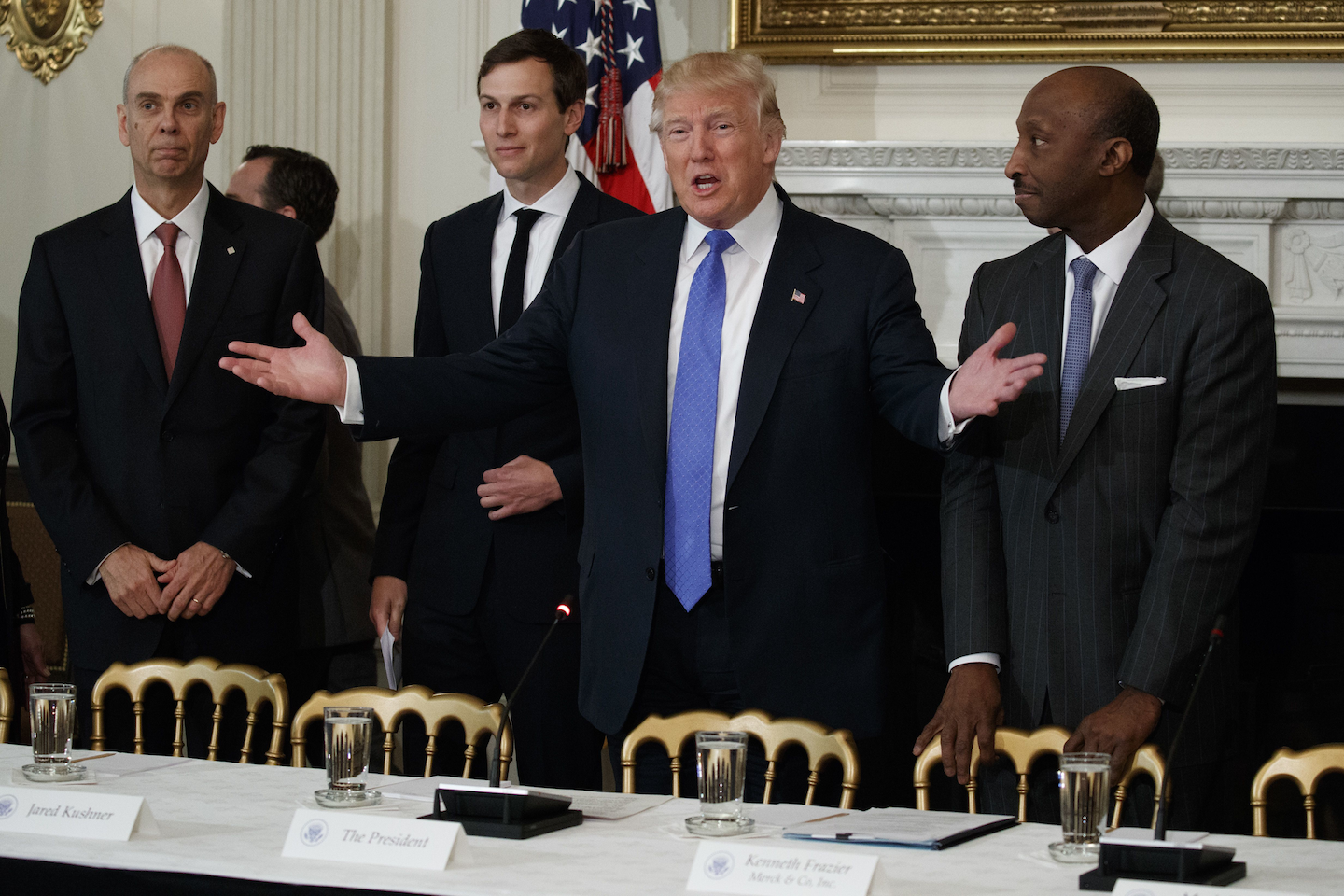 The gathering occurred amid the same kind of jovially informal atmosphere that has prevailed in several meetings Trump has held with CEOs in the four weeks since his inauguration. Most of the executives thanked the president for reaching out to them, and several expressed gratitude for his interest in meeting them face to face.

"All the CEOs are very encouraged by the pro-business policies of President Trump," Andrew Liveris, CEO of Dow Chemical, said afterward outside the White House. "Some of us have said this is probably the most pro-business administration since the Founding Fathers."

Other CEOs at the meeting included Jeff Immelt of General Electric, Doug Oberhelman of Caterpillar, Inge Thulin of 3M and Denise Morrison of Campbell Soup.

One executive said in discussions with White House officials that his company has 50 participants in a factory apprenticeship program, but could take 500 if enough were qualified. But he said that in his experience, most students coming out of high school lack the math and English skills to absorb technical manuals.

Some economists argue that businesses should offer higher pay and adopt more training if they can't find the workers they need. Higher pay would draw more young people into the field.

In the meantime, some data supports the CEOs' concerns about the shortage of qualified applicants. Government figures show there are 324,000 open factory jobs nationwide — triple the number in 2009, during the depths of the recession.

Separately, the administration sent mixed signals Thursday about a contentious proposed tax on imports, known as a "border adjustment." The proposal has the support of House Republican leaders, including Speaker Paul Ryan.

In an interview with Reuters, Trump expressed general support for a "form of tax on the border," saying it "could lead to a lot more jobs in the United States." But he stopped short of endorsing the House proposal specifically.

Earlier Thursday, Treasury Secretary Steven Mnuchin gave a more lukewarm assessment of the proposal in an interview with the business network CNBC.

Several of the manufacturing CEOs pushed for the tax during their meeting with Trump, a White House official said. But others, particularly those who rely on imported goods, were opposed, the official said.

The border-adjusted tax is opposed by large retailers such as Wal-Mart and Target, who argue that they could end up paying more in taxes than they earn in profits under the proposal. The official wasn't authorized to discuss a closed-door meeting and spoke on condition of anonymity.