United Auto Workers Win Vote At Volkswagen's Only US Plant

The repair and maintenance workers at the German automaker's plant in Chattanooga voted 108-44 for UAW representation. 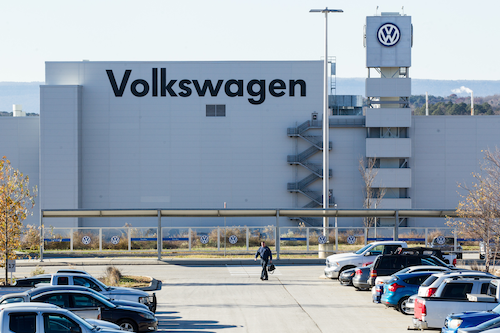 A man walks through the employee parking lot at the Volkswagen plant in Chattanooga, Tenn., on Friday, Dec. 4, 2015. (AP Photo/Erik Schelzig) 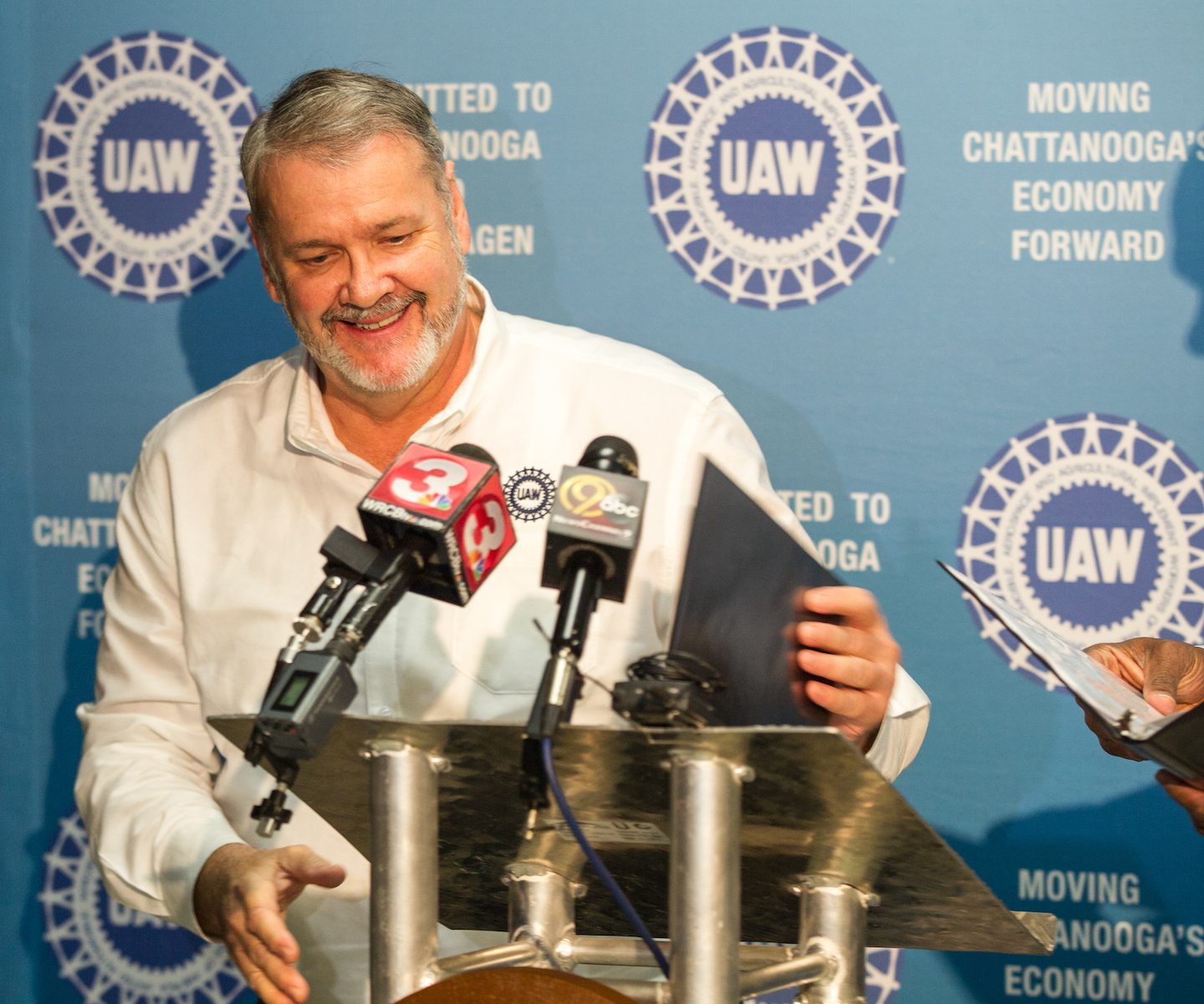 Mike Cantrell, the president of UAW Local 42, speaks about the union’s win in an election among skilled-trades workers at the Volkswagen plant in Chattanooga, Tenn., on Friday, Dec. 4, 2015. (AP Photo/Erik Schelzig)

The United Auto Workers union has gained a significant first victory at a foreign-owned automaker in the South, easily winning a vote by skilled-trades workers at Volkswagen's lone U.S. factory to have the UAW negotiate their collective bargaining agreements.

The workers who repair and maintain machinery and robots at the German automaker's plant in Chattanooga voted 108-44 for UAW representation over two days ending Friday.

Volkswagen objected to the new vote favoring the UAW to represent just 162 skilled-trades workers, arguing that all of the plant's 1,400 blue-collar workers should have a say over union issues. The German automaker said it plans to appeal the ruling allowing the vote to the full National Labor Relations Board.

"We believe that a union of only maintenance employees fractures our workforce and does not take into account the overwhelming community of interest shared between our maintenance and production employees," the company said in a statement.

The vote comes nearly 20 months after the union was narrowly defeated in an election involving all hourly employees at the plant. The UAW has been thwarted for decades in attempts to represent workers outside of General Motors, Ford and Fiat Chrysler.

Ray Curry, the director of the UAW's Southern region, said the overwhelming union victory should persuade Volkswagen to drop its legal challenge.

"We urge Volkswagen to respect the decision of its employees and recognize the local union as the representative of the skilled trades unit," he said at a news conference Friday punctuated by beeping car and truck horns of union supporters celebrating. 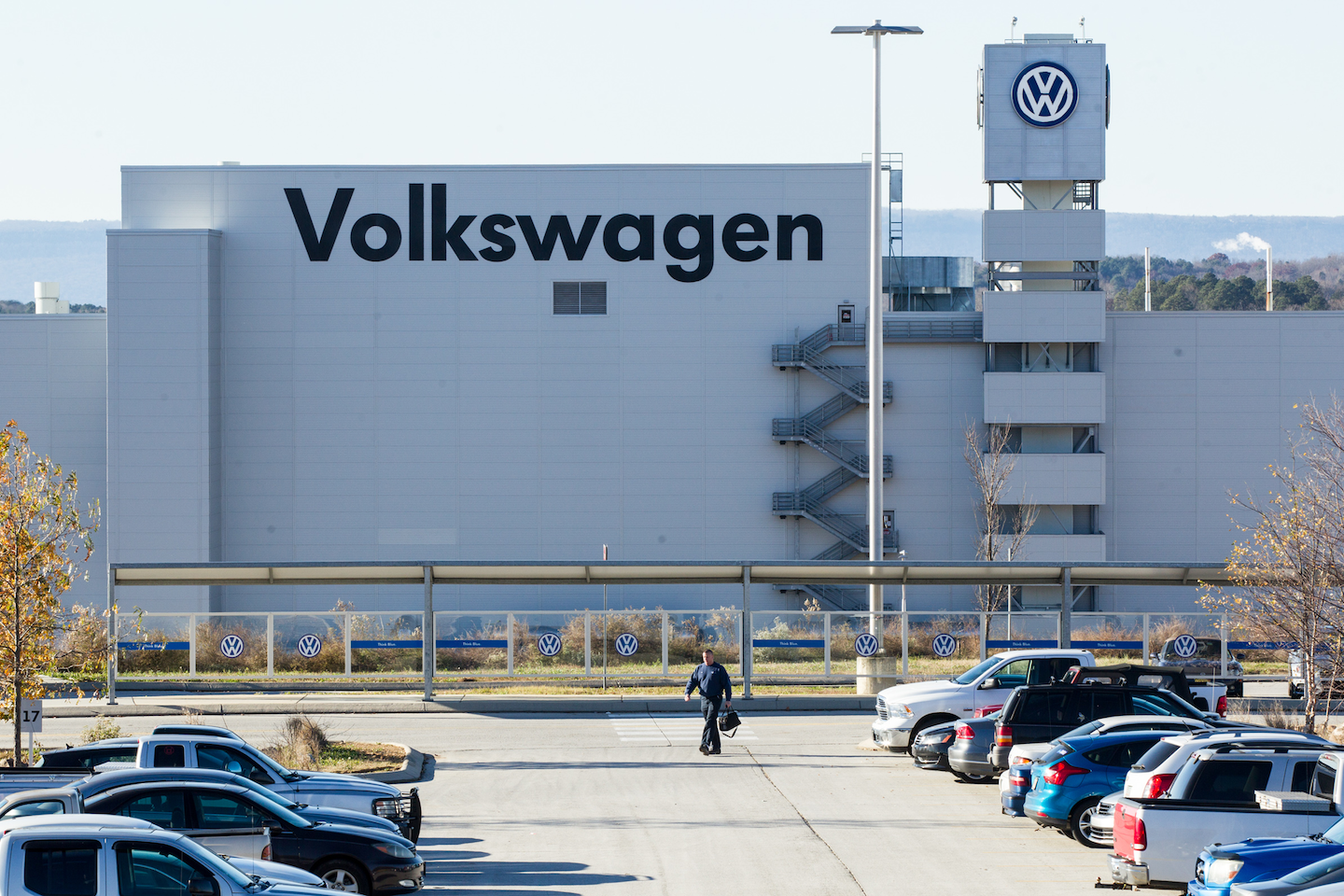 A man walks through the employee parking lot at the Volkswagen plant in Chattanooga, Tenn., on Friday, Dec. 4, 2015. (AP Photo/Erik Schelzig)

The American Council of Employees, a rival labor group at the Volkswagen plant, in a letter to workers before the vote criticized the move to organize the smaller group of workers. The group said the effort would serve to "subdivide maintenance workers with no concern for how this might negatively impact employees' long-term interests."

The group also criticized the union for seeking the vote amid the automaker's efforts to cope with its diesel emissions cheating scandal that contributed to a 60 percent drop in sales of the Chattanooga-made Passat in November.

"Volkswagen and our facility are in the midst of a crisis," the letter said. "We need unity now more than ever."

Mike Cantrell, the president of UAW Local 42 in Chattanooga, said the vote was announced weeks before cheating revelations surfaced.

"The timing of the skilled trades election is unrelated to the Volkswagen emissions scandal," he said.

Volkswagen also argued that the formation of the small bargaining unit goes against its hopes of creating a German-style works council at the plant to represent both hourly and salaried employees. The union disagreed, saying the move by the skilled-trades workers was just a first step.

"We have said from the beginning of Local 42 that there are multiple paths to reach collective bargaining," Cantrell said. "And we believe these paths will give all of us a voice at Volkswagen in due time."