While casings are often found at crime scenes, retrieving fingerprints has proven to be difficult. 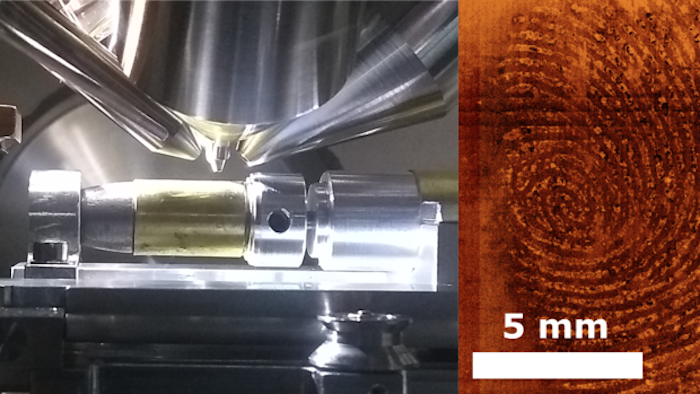 Experts have developed a unique method for retrieving high resolution images of fingermarks from curved objects like bullet casings that offers greater detail and accuracy than traditional forensic methods.

Scientists from the University of Nottingham developed a rotation stage to allow researchers and forensic practitioners to perform highly sensitive, non-destructive Time-of-Flight Secondary Ion Mass Spectroscopy (ToF-SIMS) measurements and develop high resolution fingerprint images on surfaces that conventional fingerprint imaging fails to pick up at all.

The rotation stage that they have developed opens up new possibilities for the retrieval of high-resolution fingerprints from the whole surface area of challenging shapes and materials like metal bullet casings.

Retrieval of fingermark evidence from bullet casings is an area of major difficulty for forensic scientists. While both fired and unfired casings can often be found at the scene of violent crimes, retrieving fingermarks and linking the person that loaded the gun to the crime has consistently proven to be difficult because of the physical conditions that are experienced by the bullet casings during firing and techniques that are used to develop and image the fingermarks.

When a bullet is fired, the casing experiences high temperatures, pressures and large friction forces inside the barrel of the gun. They can also be coated by the residues of propellant and the powder that are used to generate the reaction that forces the bullet out of the chamber.

These combined effects often result in the removal, evaporation or degradation of the more volatile components of fingermark residue (such as water, amino acids and low molecular weight organics such as lipids), as well as potential smudging or obscuring the mark. These factors can make it difficult for conventional methods of fingermark retrieval such as cyanoacrylate (superglue) fuming and fluorescent staining approaches to work.

ToF-SIMS is a sensitive surface-analysis technique that provides very detailed information about the locations of different chemical species on a surface. The technique uses high-energy (typically up to 30 keV) beams of positive ions directed at the sample’s surface to free secondary ions from any material that they collide with. These ions are then accelerated into a time-of-flight analyzer and separated according to their mass-to-charge ratio, producing a spectrum that is indicative of the sample’s chemical composition.

Images generated using ToF-SIMS were shown to display evidence of friction ridge and sweat pore level detail on samples where fingermarks were not visible when developed using a conventional technique involving cyanoacrylate and the dye Basic Yellow 40 (BY40).

Experiments were performed over a period of seven months to determine how fingermarks deposited on the surface of Webley MkII revolver rounds change over time. The ToF-SIMS technique is also non-destructive and no evidence of image degradation was observed over this period, even when samples were repeatedly exposed to UHV conditions.

Dr. James Sharp has been developing this new technique for several years and said: “It’s really exciting to be taking this research a step further by adding the rotational stage. We already proved in our previous research that ToF-SIMS imaging provides much more accurate and detailed fingerprint images on different types of surface. This new rotational capability allows us to image in even more detail and over whole surface areas of difficult materials and shapes whilst keeping the evidence intact. This could really pave the way for a new reliable way to analyze evidence, identify persons of interest and link them to the ammunition in a firearm.”