A witness caught the accident on video. 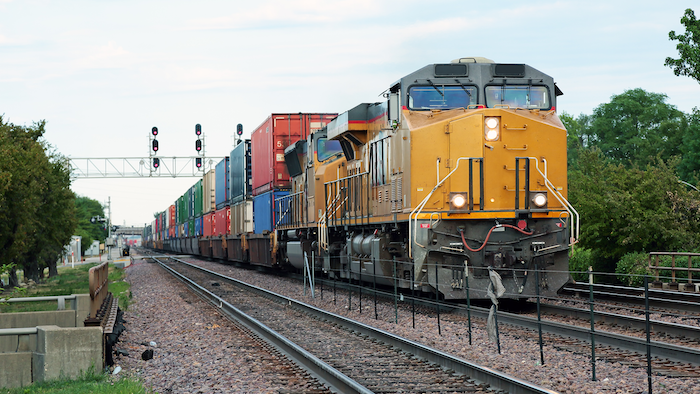 A train crashed into a semi-truck carrying a wind turbine blade Sunday in Luling, Texas.

In the midst of crossing, the train signal arms came down. A video shows the driver of the escort car, which had already crossed, exiting the vehicle to assist the truck. The escort car driver then sprinted back to his car and sped away.

The semi-truck accelerated in a desperate attempt to avoid impact, but moments later, the Union Pacific train struck the wind turbine blade, which pulled the semi-truck briefly before tipping it on its side.

No injuries were reported, including to the driver of the truck operated by Minnesota-based Northern Lights Specialized LLC. Police said the trailer split and the blade damaged three unoccupied cars, a commercial building and a utility pole. The engines at the front of the train also suffered damage.

The crash occurred at 2:30 p.m. local time, shut down U.S. 183 for several hours and the streets that met at the intersection were closed until 9:43 p.m. Two engines were replaced on the train and it was deemed safe to travel by Union Pacific safety personnel around 9 p.m.

The train crossing has been the site of 13 accidents in the previous several decades. Luling Police Chief Bill Sala said the turn proves difficult for trucks carrying oversized loads as they go from traveling west to turning to head north.

Transporting wind turbines presents challenges. According to NS Energy, the distance between most wind facilities is too great for companies to build manufacturing facilities within close proximity.

Moving turbine blades, towers and nacelles requires planning that takes often more than a year. For moving parts on the road, extensive route planning takes place, as well as route improvements -- which can mean removing trees.

A nacelle can weigh approximately 56 tons and a blade's length extends up to 50 meters. In the growing industry, a 150MW windfarm could require 650 truckloads, 140 railcars and eight ships.

Editor's note: The original video was disabled in response to a report by the copyright owner.

She is accused of clearing planes for flight that needed maintenance.
Oct 15th, 2021
Follow Us
Most Recent