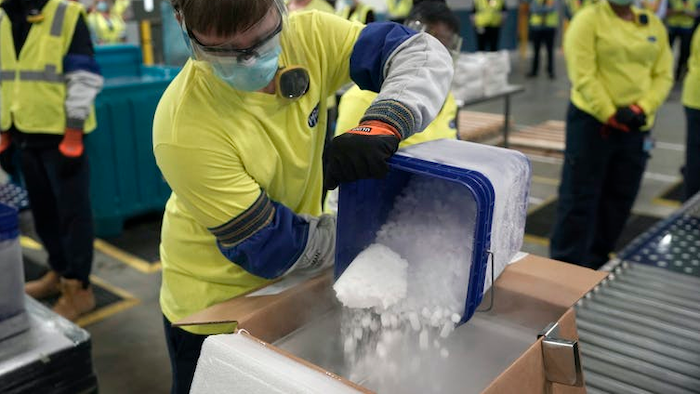 Inoculating the planet from COVID-19 presents an unprecedented logistical challenge like none we’ve seen before. Mobilizing for a world war may be the closest comparison – but in this case, the enemy is invisible and everywhere.

Some of the vaccines require super-cold storage at virtually all points along the journey until they reach someone’s upper arm. And the vaccines are primarily being produced in wealthier countries, though the need – especially now – is greatest in the poorest.

While many rich countries such as Israel, Canada and those of the U.K. have managed to inoculate most of their citizens, the vast majority of people overall have yet to receive a single dose.

I have been studying global supply chains for over two decades, including those for drugs and other health-related products. To illustrate the process and how complicated and challenging it is, I’ll take you on the journey of a single dose of Pfizer – which received full Food and Drug Administration approval on Aug. 23, 2021 – all the way from a factory in Missouri to an arm in Bangladesh.

From Missouri to Massachusetts to Michigan

Even though it’s commonly known as the Pfizer vaccine, it was actually developed under a partnership with BioNTech, which is based in Germany.

It is one of two vaccines that use new mRNA technology, which provides genetic instructions that encode a viral protein. Once the vaccinated person’s cells start making the coronavirus protein, it prompts their immune system to design powerful antibodies that can neutralize the virus if they ever encounter it.

A vaccine dose’s 60-day journey to distribution starts with raw ingredients in a Pfizer factory in Chesterfield, Missouri, a suburb of St. Louis. This factory produces the key raw material called plasmids, which are basically strands of DNA that contain the genetic instructions for building coronavirus proteins.

Bottles of the DNA material are frozen, bagged, sealed and packed into a container and shipped to Andover, Massachusetts. There, the DNA is processed into mRNA, which is the active ingredient in the vaccine – also referred to as the “drug substance.”

The mRNA is packaged in plastic bags – each containing enough material to produce 10 million doses – frozen and shipped to Kalamazoo, Michigan, where the vaccine reaches the last stage of the process: formulation and filling.

First, the drug substance is combined with lipid nanoparticles – basically fat – to protect the mRNA and help it enter the human cells. Next, the combination is squirted into glass vials, six doses per vial, packaged and frozen for distribution.

Here I have presented a simplified three-step process. Making a vaccine, however, is more much complex, requiring more than 200 different materials supplied by factories spread across the world.

While awaiting distribution, the Pfizer vaccine vials must be stored at temperatures from minus 112 F to minus 76 F (minus 80 C to minus 60 C) in ultra-cold freezers.

To put this in perspective, the average annual temperature at the South Pole is about minus 58 F (minus 50 C). Ice creams and frozen steaks are kept, during storage and transport, below minus 20 F (minus 29 C).

Pfizer designed its own custom cooler box to make it easier to transport its vaccines across the U.S. and around the world. Vials are placed into trays, with 195 vials per tray. Each box can fit five trays. Each box of 5,850 doses has a GPS tracker and contains a monitor that keeps a log of the temperature.

Pfizer’s custom boxes don’t require any other specialized equipment to transport the vaccines, and the ultra-cold temperature in the cooler boxes is maintained during transport using dry ice that needs to be replaced every five days.

A problem with the dry ice is that it’s carbon dioxide in solid form. The dry ice gradually turns from solid to gas, which can be dangerous without proper ventilation.

Once it has a shipment ready for delivery to a given destination, Pfizer contacts one of the global freight carriers it’s partnered with, such as UPS or DHL, which picks up a designated number of boxes and ships them directly to the country in need within one or two days. 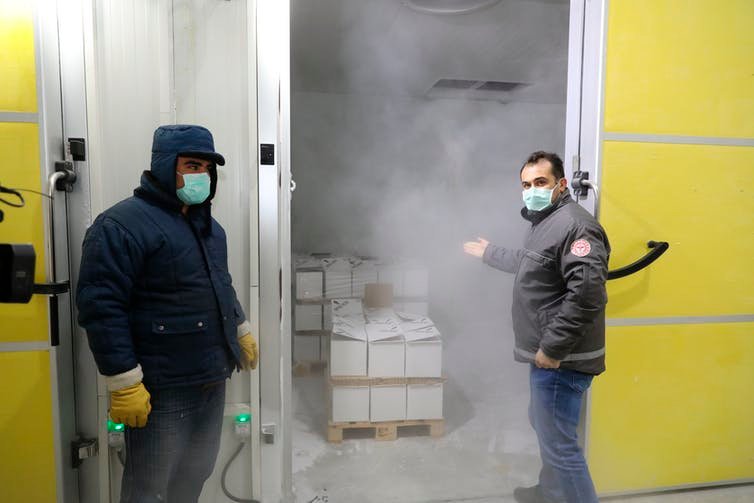 Countries must have ultra-cold storage infrastructure, such as this warehouse in Turkey, to accept doses of Pfizer’s vaccine.Turkish Health Ministry via AP

For a country to receive Pfizer vaccines, it needs to have the capacity to store ultra-cold medical items.

While this isn’t a problem for wealthier nations, poorer countries are less likely to have the necessary infrastructure in place.

Upon arrival in a country, the shipment goes into a deep freezer, typically at the airport or a central storage facility, until it is ready to be used. The vaccine has to be kept in ultra-cold storage until within about a month before it’s injected into someone’s shoulder.

In poorer countries that do have the right infrastructure, such as Bangladesh, distribution still needs to be restricted to a few select hospitals in large urban areas where there are ultra-cold storage facilities. For example, Bangladesh will use Pfizer vaccines at seven hospitals in its capital city, Dhaka.

The frosty journey of the Pfizer vaccine itself is just one part of getting people their jabs. Ancillary supplies needed for vaccination include special syringes delivering a 0.3-milliliter (mL) dose, needles, sterile alcohol pads and personal protective equipment for the health care worker delivering the shot.

Preparing the injection of the Pfizer vaccine requires a complex dance. First the nurse thaws the vaccine in a refrigerator to a range of 36 F to 46 F (2 C to 8 C), where it can be held for up to 31 days. Just before vaccination, the nurse brings the vial to room temperature of 36 F to 77 F (2 C to 25 C), at which it can survive no more than six hours.

Because the Pfizer vaccine is shipped as a concentrate, the nurse needs to dilute it with 1.8 milliliters of saline, resulting in a mixture sufficient for six doses.

There’s a further complication in that many low- and medium-income countries use syringes that ensure a fixed maximum dose and are automatically disabled after single use. This takes away the guesswork and prevents mistakes. UNICEF is responsible for delivering these extra supplies to poorer countries that are getting their vaccines through COVAX, the global initiative set up to distribute COVID-19 vaccines to low- and middle-income countries. 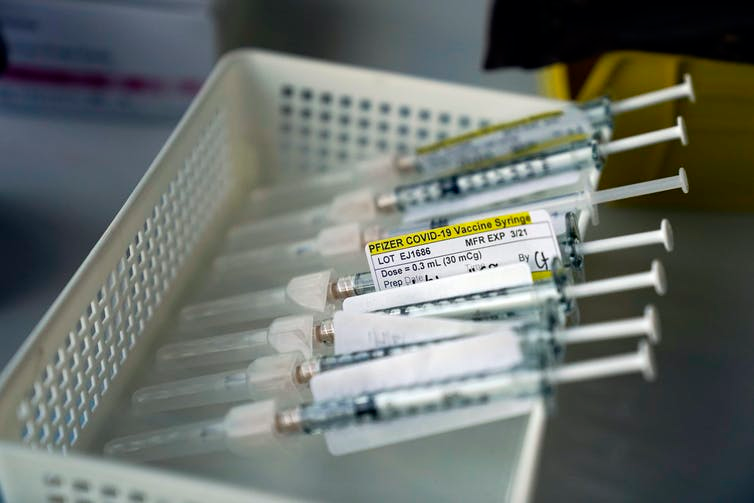 The last step of the process before inoculation involves diluting the vaccine with saline to create 0.3-milliliter doses.AP Photo/Jae C. Hong

Other vaccines have much less demanding cold supply chain requirements, don’t require dilution and use syringes with standard dose sizes, allowing more countries to use them, including in rural areas.

Most of the COVID-19 vaccines approved for use by the World Health Organization, such as those made by AstraZeneca and Johnson & Johnson, require only standard cold storage of 35.6 F to 46.4 F (2 C to 8 C).

I focused on Pfizer in part because it makes up the lion’s share of doses donated by the U.S. to COVAX.

As of Aug. 22, 2021, a total of 4.97 billion COVID-19 vaccine doses had been administered, a feat unimaginable in the fall of 2020. But global coverage has been highly uneven. While a little over half of the population in high-income countries have been vaccinated, only 1.4% of low-income populations have received theirs. Many of these countries are in Africa.

The development of several vaccines, 10 of which are WHO-approved, many within a year, was a monumental achievement of science and global collaboration – especially since it previously took on average a decade.

But creating supply chains to deliver all those lifesaving vaccines to people all over the world will be an equally remarkable accomplishment.

This article is republished from The Conversation under a Creative Commons license. Read the original article here: https://theconversation.com/how-a-vial-of-pfizer-covid-19-vaccine-travels-from-a-lab-in-missouri-to-an-arm-in-bangladesh-162572.