But nobody is checking for violations. 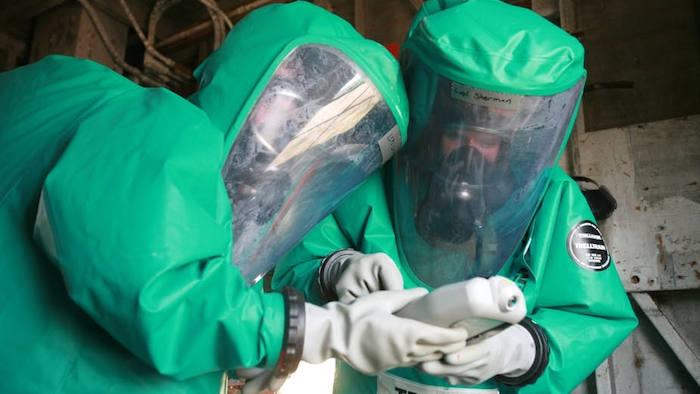 A global treaty bans research or stockpiling of biological weapons — but allows bioweapon defense planning.
US Dept. of Defense via DVIDS

Scientists are making dramatic progress with techniques for “gene splicing” – modifying the genetic makeup of organisms.

This work includes bioengineering pathogens for medical research, techniques that also can be used to create deadly biological weapons. It’s an overlap that’s helped fuel speculation that the SARS-CoV-2 coronavirus was bioengineered at China’s Wuhan Institute of Virology and that it subsequently “escaped” through a lab accident to produce the COVID-19 pandemic.

The world already has a legal foundation to prevent gene splicing for warfare: the 1972 Biological Weapons Convention. Unfortunately, nations have been unable to agree on how to strengthen the treaty. Some countries have also pursued bioweapons research and stockpiling in violation of it.

As a member of President Bill Clinton’s National Security Council from 1996 to 2001, I had a firsthand view of the failure to strengthen the convention. From 2009 to 2013, as President Barack Obama’s White House coordinator for weapons of mass destruction, I led a team that grappled with the challenges of regulating potentially dangerous biological research in the absence of strong international rules and regulations.

The history of the Biological Weapons Convention reveals the limits of international attempts to control research and development of biological agents.

Reasoning that bioweapons had no useful military or strategic purpose given the awesome power of nuclear weapons, the U.K. had ended its offensive bioweapons program in 1956. But the risk remained that other countries might consider developing bioweapons as a poor man’s atomic bomb.

In the original British proposal, countries would have to identify facilities and activities with potential bioweapons applications. They would also need to accept on-site inspections by an international agency to verify these facilities were being used for peaceful purposes.

These negotiations gained steam in 1969 when the Nixon administration ended America’s offensive biological weapons program and supported the British proposal. In 1971, the Soviet Union announced its support – but only with the verification provisions stripped out. Since it was essential to get the USSR on board, the U.S. and U.K. agreed to drop those requirements.

In 1972 the treaty was finalized. After gaining the required signatures, it took effect in 1975.

Under the convention, 183 nations have agreed not to “develop, produce, stockpile or otherwise acquire or retain” biological materials that could be used as weapons. They also agreed not to stockpile or develop any “means of delivery” for using them. The treaty allows “prophylactic, protective or other peaceful” research and development – including medical research.

However, the treaty lacks any mechanism to verify that countries are complying with these obligations.

This absence of verification was exposed as the convention’s fundamental flaw two decades later, when it turned out that the Soviets had a great deal to hide.

In 1992, Russian President Boris Yeltsin revealed the Soviet Union’s massive biological weapons program. Some of the program’s reported experiments involved making viruses and bacteria more lethal and resistant to treatment. The Soviets also weaponized and mass-produced a number of dangerous naturally occurring viruses, including the anthrax and smallpox viruses, as well as the plague-causing Yersinia pestis bacterium.

Yeltsin in 1992 ordered the program’s end and the destruction of all its materials. But doubts remain whether this was fully carried out.

Another treaty violation came to light after the U.S. defeat of Iraq in the 1991 Gulf War. United Nations inspectors discovered an Iraqi bioweapons stockpile, including 1,560 gallons (6,000 liters) of anthrax spores and 3,120 gallons (12,000 liters) of botulinum toxin. Both had been loaded into aerial bombs, rockets and missile warheads, although Iraq never used these weapons.

In the mid-1990s, during South Africa’s transition to majority rule, evidence emerged of the former apartheid regime’s chemical and biological weapons program. As revealed by the South African Truth and Reconciliation Commission, the program focused on assassination. Techniques included infecting cigarettes and chocolates with anthrax spores, sugar with salmonella and chocolates with botulinum toxin.

In response to these revelations, as well as suspicions that North Korea, Iran, Libya and Syria were also violating the treaty, the U.S. began urging other nations to close the verification gap. But despite 24 meetings over seven years, a specially formed group of international negotiators failed to reach agreement on how to do it. The problems were both practical and political.

First, the types of facilities that research and produce biological agents, such as vaccines, antibiotics, vitamins, biological pesticides and certain foods, can also produce biological weapons. Some pathogens with legitimate medical and industrial uses can also be used for bioweapons.

So an effective bioweapons verification process would require nations to identify a large number of civilian facilities. Inspectors would need to monitor them regularly. The monitoring would need to be intrusive, allowing inspectors to demand “challenge inspections,” meaning access on short notice to both known and suspected facilities.

Finally, developing bioweapons defenses – as permitted under the treaty – typically requires working with dangerous pathogens and toxins, and even delivery systems. So distinguishing legitimate biodefense programs from illegal bioweapons activities often comes down to intent – and intent is hard to verify.

Because of these inherent difficulties, verification faced stiff opposition.

As the White House official responsible for coordinating the U.S. negotiating position, I often heard concerns and objections from important government agencies.

The Pentagon expressed fears that inspections of biodefense installations would compromise national security or lead to false accusations of treaty violations. The Commerce Department opposed intrusive international inspections on behalf of the pharmaceutical and biotechnology industries. Such inspections might compromise trade secrets, officials contended, or interfere with medical research or industrial production.

Germany and Japan, which also have large pharmaceutical and biotechnology industries, raised similar objections. China, Pakistan, Russia and others opposed nearly all on-site inspections. Since the rules under which the negotiation group operated required consensus, any single country could block agreement.

In January 1998, seeking to break the deadlock, the Clinton administration proposed reduced verification requirements. Nations could limit their declarations to facilities “especially suitable” for bioweapons uses, such as vaccine production facilities. Random or routine inspections of these facilities would instead be “voluntary” visits or limited challenge inspections – but only if approved by the executive council of a to-be-created international agency monitoring the bioweapons treaty.

But even this failed to achieve consensus among the international negotiators.

Finally, in July 2001, the George W. Bush administration rejected the Clinton proposal – ironically, on the grounds that it was not strong enough to detect cheating. With that, the negotiations collapsed.

Since then, nations have made no serious effort to establish a verification system for the Biological Weapons Convention.

Even with the amazing advances scientists have made in genetic engineering since the 1970s, there are few signs that countries are interested in taking up the problem again.

This is especially true in today’s climate of accusations against China, and China’s refusal to fully cooperate to determine the origins of the COVID-19 pandemic.

This article is republished from The Conversation under a Creative Commons license. Read the original article here: https://theconversation.com/bioweapons-research-is-banned-by-an-international-treaty-but-nobody-is-checking-for-violations-163472.