Treated heavy crude oil can be moved great distances without heating the pipeline or adding large amounts of chemical or diluent. 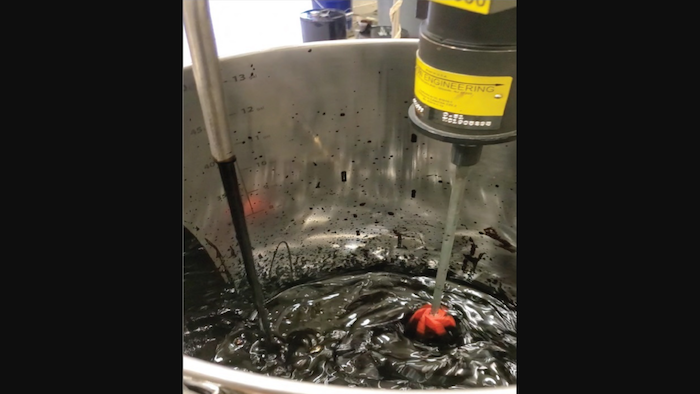 In the photo, additive is blended into heavy crude oil in this step of the SwRI-developed “EZ Flow” to treat heavy crude oils.
Southwest Research Institute

The novelty of the new process allows for transport of the treated heavy crude oil over great distances without heating the pipeline and without adding large amounts of chemical or diluent.

Conventional techniques to transport heavy crude oil are costly because they often use large volumes of chemicals or diluents and frequently require multiple treatment techniques to be applied simultaneously.

Transporting heavy crude oil and bitumen via pipeline is challenging at best and impossible at worst due to its high density and viscosity and very low mobility at reservoir temperatures.

“The most important factor influencing its high viscosity are the intermolecular forces between the branched molecules and the tendency of the asphaltenes and paraffins to aggregate producing cumuli of heavy hydrocarbons,” said Sergio Trevino, chemical engineer and SwRI consultant. “Those agglomerations have enough attraction between them to generate structural compression of the oil, and thus, reduce its volume. That, in turn, increases the viscosity of the heavy crude oil.”

The U.S. has more than 190,000 miles of liquid petroleum pipeline networks. Pipeline transportation is an environmentally friendly, economic way to move crude oils over long distances.

“According to industry experts, over the next 80 years, heavy crude oil production will increase exponentially as lighter crude oil reserves dwindle and those available become more expensive and difficult to recover,” Wood said.

The low concentrations of proprietary additives needed for EZ Flow make it environmentally friendlier and less expensive than other currently available commercial technologies.

SwRI is also investigating whether, with further research and optimization, EZ Flow could be used to upgrade, or chemically treat, heavy crude oil. “The next step is to scale-up the EZ Flow technology to start the commercialization process,” Wood said.