Environmental groups argue that punishing fees are purposely discouraging the adoption of solar power in the sun-rich state. 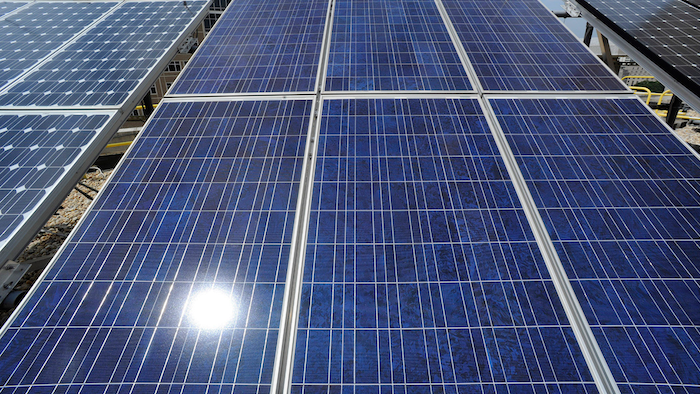 Sunlight reflects off solar panels on the roof of the older part of the Alabama Power building in Birmingham, Ala., Aug. 9, 2012.
Bernard Troncale/The Birmingham News via AP

MONTGOMERY, Ala. (AP) — The fees imposed by the Alabama Power company on customers who generate their own electricity with rooftop or on-site solar panels are now the subject of a federal lawsuit against the state's regulators.

Environmental groups argue that punishing fees are purposely discouraging the adoption of solar power in the sun-rich state.

Alabama Power maintains that the fees are needed to maintain the infrastructure that provides backup power to customers when their solar panels don’t provide enough energy.

The Southern Environmental Law Center and Ragsdale LLC filed the lawsuit on Monday against the Alabama Public Service Commission on behalf of four Alabama Power customers who installed solar panels on their properties and the Greater-Birmingham Alliance to Stop Pollution, or GASP.

“Alabama is being left behind by other Southern states when it comes to solar generation, and the jobs, bill savings and other benefits that come with it," SELC's statement said. "These charges are a significant roadblock to our state’s success.”

Alabama Power charges a $5.41-per-kilowatt fee, based on the capacity of the home system, on people who use solar panels or other means to generate part of their own electricity. That amounts to a $27 monthly fee on a typical 5-kilowatt system. The average solar panel setup for a home costs about $10,000, according to the law center, and the fees add another $9,000 or so over a system's 30-year lifespan, dramatically increasing costs and reducing any financial benefit for the homeowner.

Alabama Power maintains that the fees are needed to maintain the infrastructure that provides backup power. A spokesperson for Alabama Power said, “we believe Alabama law and sound ratemaking principles were followed in reaching a fair determination of the cost for this service.”

“It is important to us that all of our 1.5 million customers are treated fairly. There is nothing about the lawsuit that changes our position – we believe the lawsuit is without merit. Customers who want to rely on the company to back up their own generation should pay their share of associated costs,” Alabama Power spokesperson Alyson Tucker wrote in an email.

However, two members of the five-member panel issued a separate statement expressing concern that Alabama regulators may be violating federal policies designed to encourage the development of cogeneration and small power production facilities and to reduce the demand for fossil fuels.

While the lawsuit deals with home and business solar energy systems, Alabama Power on Tuesday won approval for its own large solar project.