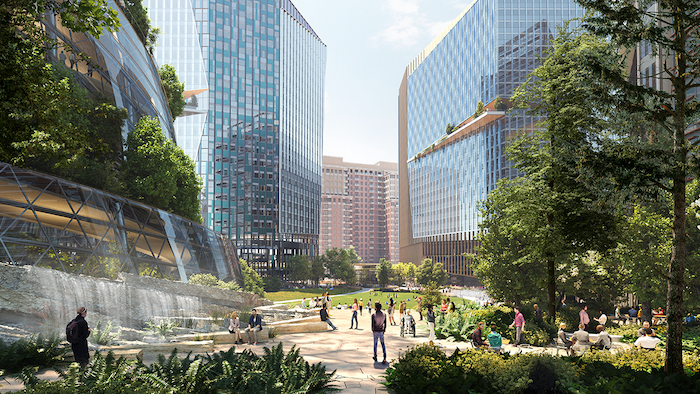 An artist rendering of the Forest Plaza at Amazon's HQ2 in Arlington, Va.
Amazon

ARLINGTON, Va. (AP) — Amazon is taking a big step toward establishing its presence at its emerging northern Virginia headquarters, with plans to hire nearly 2,000 workers in a variety of jobs.

The new hires will more than double Amazon's presence in Arlington, where about 1,600 are currently employed. The jobs cover a variety of specialties, including software developers, project managers, engineers and store designers.

In a blog post Wednesday, the company said the new jobs constitute the highest number of open positions in Arlington since the company announced its plans back in 2018 to establish a second headquarters in the Crystal City section of the county.

Wednesday's announcement comes as the company is slated to make a presentation to county planning officials on its plans for PenPlace, the second phase of its headquarters development. Those plans call for construction of a unique, 350-foot helix-shaped office tower that can be climbed from the outside like a mountain hike.

The number of new executives appointed in 2021 surpassed pre-pandemic highs.
Nov 22nd, 2021
Follow Us
Most Recent