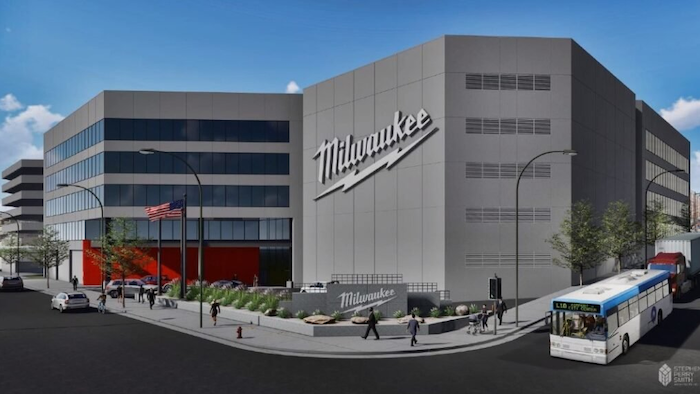 A little over one month after Milwaukee Tool shared plans for a downtown expansion project with the city of Milwaukee, the iconic power tool maker gained unanimous city council approval on Tuesday.

On the same day, the Brookfield, WI-based company announced it plans for the $30 million expansion that involves buying and renovating a vacant 330,000-square-foot office building downtown that will eventually house 1,210 employees by 2024. The project also gives Milwaukee Tool the option to add another 150,000-square-feet for another 790 employees.

Expected to open this October, the office will serve as an extension of the company's global headquarters in Brookfield — about 12 miles northwest of the downtown site.

“Over the past 10 years we’ve grown at an incredible rate, not just across the country and the world, but also at our global headquarters in Wisconsin," said Steve Richman, group president of Milwaukee Tool. "By extending our corporate presence into downtown Milwaukee, we are poised for continued growth. As one of the largest employers in Southeastern Wisconsin, we’re thrilled to expand our presence in the city, as we continue to attract, retain, and recruit from a diverse pool of local talent."

The Milwaukee City Council voted to approve $20 million in city financing for the project, comprised of $12.1 million if Milwaukee Tool has at least 1,210 employees that the new office by the end of 2026, and a second $7.9 million grant dependent upon the expansion option.

In its Tuesday announcement, Milwaukee Tool noted that it has redeveloped 190,000-square-feet of space in Brookfield over the past decade to boost its research and development, prototyping, packaging design, marketing, sales, training facilities and administrative offices. That included a project the company finished in 2017 in which it finished building and moving into a 200,000-square-foot office building at its Brookfield campus. More recently, Milwaukee Tool moved into another 116,000-square-foot facility there in January 2020.

In late 2019, Milwaukee Tool announced a $100+ million expansion between the Milwaukee and Madison areas, with more than $100 million going to a new campus in Milwaukee suburb Menomonee Falls, and $7.5 million to expand its Imperial Blades production facilities in Madison suburb Sun Prairie. Combined, those projects are expected to create 870 jobs by 2025.

Milwaukee Tool noted Tuesday that it will have more than 3,100 employees in Wisconsin by the end of 2021 and that it has invested $368 million in total US expansion projects over the past five years. The company now has nearly 6,000 employees nationwide.