The ruling requires the state to provide computers and high-speed internet to students who still don’t have them. 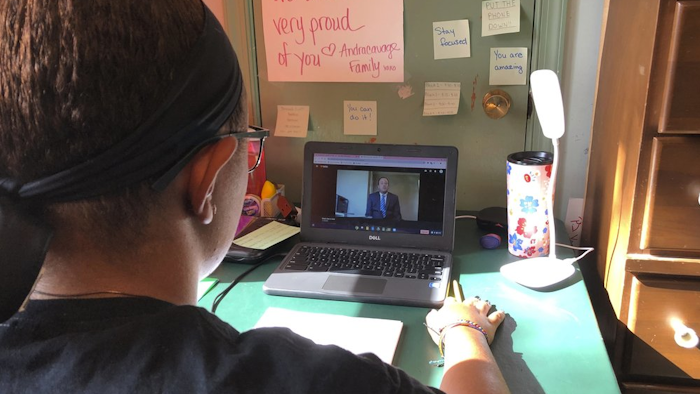 SANTA FE, N.M. (AP) — A New Mexico judge has ordered education officials to provide computers and high-speed internet to students who still don’t have them in a landmark ruling that for the first time in the state has set a standard for internet speeds for public school children.

The ruling requires state officials to immediately determine which students covered by the sweeping lawsuit are still lacking quality internet, or devices, and to provide them with what they need, including transportation if they can’t get fast internet from home.

“Children who are lacking access to internet and technology for remote learning are not getting much of an education, if at all, let alone one that is sufficient to make them college and career ready,” said state District Judge Matthew Wilson in the ruling Friday morning. It’s unclear how the court might compel state officials to act on the ruling or when it might hold them in contempt.

The vast majority of New Mexico schools have opened to in-person learning this month after closures due to the pandemic. But school districts serving tribal areas, which were particularly hard-hit by COVID-19 cases and deaths, are still under lockdown orders and some are still in remote or partially remote learning.

About 10% of New Mexico children are Native American and often confront major barriers to online and in-person learning. When the pandemic first hit, 55% of Native American students could not connect to online courses, according to a Legislative Finance Committee report. Many teachers serving at-risk students also lacked at-home internet and computers.

Hispanic and Native American mothers sued over the lack of access, and their lawsuits were combined as the Martinez-Yazzie case in 2014, and won a favorable ruling in 2018. Their lawyers complained to the court about internet access in December after it learned that many plaintiffs were still offline a semester into mandated remote learning.

“This is a great day for New Mexico’s children,” said Melissa Candelaria, a senior attorney at the New Mexico Center on Law and Poverty, which represents the Martinez-Yazzie plaintiffs. “Many students are not back at school and internet services are unavailable, especially in rural districts and districts serving predominantly Native American students. Even when students come back into the physical classroom, technology will continue to be a necessity.”

The ruling requires education officials to determine the internet speeds of the students covered by the lawsuit, including low-income students, disabled students, and English language learners. Altogether, that’s more than three-quarters of K-12 students in the state. That monitoring is technically complex, and no state agencies have published comprehensive data on the quality of students' at-home internet connections.

The Public Education Department declined to address the decision Friday, saying it needed to review the written ruling, which won't be published until Monday.

“However, it is worth noting that PED and school districts have worked hard over the past year to expand highspeed internet access and put digital devices in the hands of students most in need so they could fully access their guaranteed public education. That work continues,” said department spokeswoman Judy Robinson.

On the Navajo Nation alone, over 6,000 laptops were distributed and 1,250 were added and 380 miles of fiber optic cable were laid.

Some homes are simply too far for wireless towers that send internet to WiFi hot spots, and state officials have estimated a full extension of the state's broadband system would cost around $5 billion; larger than its entire annual education budget.

Schools have had to make due. One school serving Native American students without internet even hand-delivered homework and lessons on USB sticks. Over the past year, many families have had to drive students to parking lots at libraries, churches, and fast-food restaurants to upload and download homework assignments.

The order establishes for the first time in the state a required level of internet access for students. Wilson said it must be “high-speed service sufficient to reliably download and upload assignments, stream instructional videos and participate in individual and/or group video conferencing.”

Many of rural hot spots will fall short of that requirement because they are not strong enough to enable video chatting.