The company failed to fulfill a 2017 agreement to deliver hundreds of thousands of tons of coal for shipment overseas. 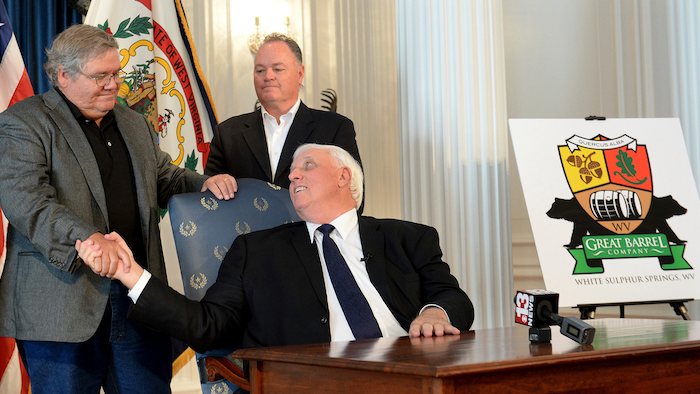 DOVER, Del. (AP) — A federal judge in Delaware has ordered West Virginia Gov. James Justice and one of his family-owned coal companies to pay $6.8 million for breaching a contract with a Pennsylvania coal exporter.

The ruling was handed down Monday in a lawsuit filed in 2018 by Pennsylvania-based Xcoal Energy & Resources.

Xcoal claimed that the billionaire coal magnate and two of his companies, Roanoke, Virginia-based Bluestone Energy Sales Corp. and Southern Coal Corp., failed to fulfill a 2017 agreement to deliver hundreds of thousands of tons of coal for shipment overseas.

The Justice companies argued that Xcoal breached the agreement in several ways, and that it has a history of being sued by other coal companies for failing to complete shipments and then deflecting blame.

U.S. District Court Judge Leonard Stark ruled that Xcoal had proven by a preponderance of the evidence that Bluestone was the party that breached the coal supply agreement, and that the defendants failed to prove any of their counterclaims.

Stark determined that Xcoal was entitled to slightly more than $6.8 million in damages from Justice and Southern Coal.

Xcoal and Bluestone entered into an agreement in 2017 under which Bluestone would supply Xcoal with 720,000 net tons of metallurgical grade coal from a mine in Bishop, West Virginia. Southern Coal and Justice guaranteed the payment and performance obligations of Bluestone, a pass-through entity with no assets.

The agreement entitled Xcoal to a $9.88 per ton discount from market price, with deliveries to be made in monthly installments of about 30,000 tons over 24 months.

The companies quickly found themselves at odds over the timing and method of rail shipments, as well as the sampling and quality of the coal being delivered. As a result, Xcoal received less than 24,000 tons of coal over seven months between November 2017 and May 2018, when Xcoal filed its lawsuit, leaving more than 696,000 tons undelivered.

The agreement did not specify whether Xcoal or Bluestone was to arrange for empty Norfolk Southern railcars to be brought to the mine.

Noting that responsibility for obtaining the empty rail cars was the critical issue in the case, the judge found that Bluestone was responsible for getting the empty railcars and it breached the agreement by failing to do so.

Stark said Xcoal was entitled to damages equaling $9.98 for each ton of undelivered coal, offset by a payment of $65,000 that it had withheld.

Lawyers for Justice and his two companies argued that Xcoal and its owner, Ernie Thrasher, had placed unreasonable commercial demands for coal shipments from Bluestone that went beyond the scope of the agreement. They also said Xcoal unreasonably rejected shipments of coal.

The trial in the case began last August but was quickly knocked off course when one of Justice’s attorneys informed Stark after opening statements about an anonymous letter he had received earlier that morning. The one-page letter bore a Pittsburgh postmark and was signed “XCOAL WHISTLE BLOWER.”

The letter alleged that Thrasher had settled an earlier lawsuit by signing a new coal sales agreement with Bluestone with no intention of meeting Xcoal’s contractual obligations. It claimed that Thrasher’s plan was to force Bluestone to default through delayed coal shipments and withheld payments so Xcoal could collect a $10 million guarantee from Justice.

The letter also suggested that Thrasher contrived to not accept shipments from Bluestone by obtaining false lab reports about the chemical composition of the coal, that Xcoal had someone “inside” coal-testing company SGS, and that Rick Taylor, an Xcoal consultant, directed the lab to falsify results. The letter also claimed that Norfolk Southern granted favored treatment and special rates to Xcoal.

An attorney for Xcoal told the judge that the letter looked like “a total setup” by people trying to falsely attribute things to Thrasher.