The new measure cited statistics showing few of the 662 public corporations headquartered in California had Blacks or Latinos on their boards. 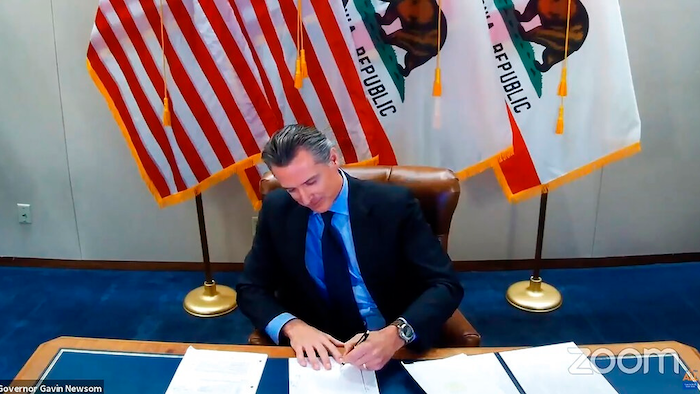 In this Wednesday, Sept. 30, 2020 file image made from video from the Office of the Governor, California Gov. Gavin Newsom signs into law a bill that establishes a task force to come up with recommendations on how to give reparations to Black Americans in Sacramento, Calif. A conservative legal group announced Monday, Oct. 5 that it sued to block California's first-in-the-nation law that requires hundreds of corporations based in the state to have directors from racial or sexual minorities on their boards.
Office of the Governor via AP, File

LOS ANGELES (AP) — A conservative legal group announced Monday that it sued to block California’s first-in-the-nation law that requires hundreds of corporations based in the state to have directors from racial or sexual minorities on their boards.

Judicial Watch claimed in the suit filed Wednesday in Los Angeles Superior Court that the law is unconstitutional.

“The legislation’s requirement that certain corporations appoint a specific number of directors based upon race, ethnicity, sexual preference, and transgender status is immediately suspect and presumptively invalid and triggers strict scrutiny review by the court," the group said.

Gov. Gavin Newsom signed the bill last week saying it was crucial to fighting racial injustice by giving minorities “seats at the table” of corporate power.

California already has a law requiring corporations to have at least one female director on their boards. Judicial Watch is also challenging that law in court and a trial is scheduled next summer.

The new measure cited statistics showing few of the 662 public corporations headquartered in California had Blacks or Latinos on their boards.

The measure requires at least two directors from different racial or sexual minority groups be appointed to boards with four to nine directors by the end of 2022. Three directors are required for boards with nine or more directors.

Firms that don’t comply would face fines of $100,00 for first violations and $300,000 for repeated violations.

Those who qualify would self-identify as Black, Latino, Asian, Pacific Islander, Native American, Native Hawaiian or Alaska Native, or as gay, lesbian, bisexual or transgender.

The lawsuit notes that a Senate analysis said the bill draws distinctions based on race and ethnicity, and therefore is “suspect.”

The group said the law is unconstitutional because the quotas don't achieve a compelling governmental interest that is more narrowly defined than “the existence of general societal discrimination.”

“No surprise!" Holden said in a statement about the lawsuit. “Some would rather maintain a status quo that doesn’t embrace diversity and inclusion.”

The lawsuit seeks to an order declaring it illegal to spend state funds to ensure companies comply with the law and to prevent the law from taking effect.

“California’s government has a penchant for quotas that are brazenly unconstitutional,” Judicial Watch President Tom Fitton said in a statement. “Gender quotas and now new quotas for numerous other groups for corporate boards are slaps in the face to the core American value of equal protection under the law."