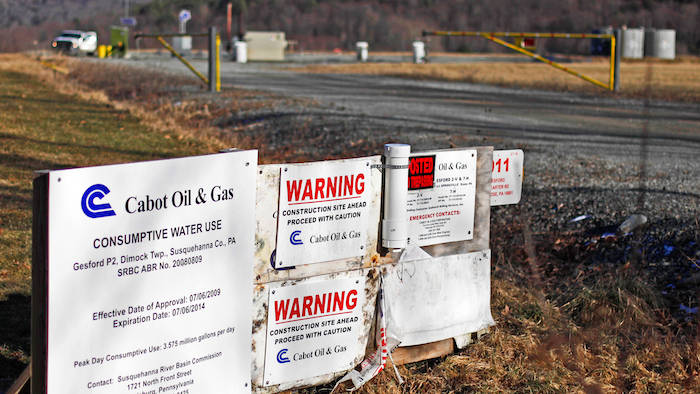 An energy company faces felony charges that it polluted residential water wells in a Pennsylvania community that has long been a battleground in the national debate over natural gas drilling and fracking.

The company has racked up hundreds of civil violations since 2007, and it has been banned from drilling in a 9-square-mile area of Dimock.

“We find that, over a period of many years, and despite mounting evidence, Cabot Oil & Gas failed to acknowledge and correct conduct that polluted Pennsylvania water through stray gas migration,” the grand jury wrote, criticizing Cabot’s “long-term indifference to the damage it caused to the environment and citizens of Susquehanna County.”

The Pennsylvania attorney general’s office charged Cabot with a total of 15 criminal counts, including illegal discharge of industrial wastes and unlawful conduct under the state's Clean Streams Law. Maximum fines are $50,000 or $25,000, depending on the count.

“Cabot took shortcuts that broke the law, damaged our environment, harming our water supplies and endangering Pennsylvanians. They put their bottom line ahead of the health and safety of our neighbors,” Attorney General Josh Shapiro said in a video statement.

Cabot said it would respond once it had fully reviewed the charges, but that it values “community commitment and environmental compliance."

“Cabot will continue to work constructively with regulators, political representatives, and most importantly our neighbors in Pennsylvania to be responsible stewards of natural resources and the environment,” Cabot said in a written statement.

The company has long insisted the gas in Dimock’s aquifer is naturally occurring, saying its pre-drill testing of thousands of private water wells in the area show a high percentage with methane. The grand jury asserted that Cabot’s initial sampling of wells and groundwater did not include tests for methane. State environmental regulators eventually determined that Cabot's drilling and fracking operations leaked explosive levels of methane into private water supplies.

It was an exploding water well on New Year’s Day 2009 that first aroused public attention in Dimock, a patchwork of homes and farms about 150 miles (241 kilometers) north of Philadelphia.

Residents said they suffered ill health effects from the contamination of their water with methane and drilling chemicals, including nausea, dizziness, skin rashes, impaired vision and breathing difficulties. Property values plummeted, too, they said.

Methane is not known to be harmful to ingest, but at high concentrations it’s flammable and, if it escapes into enclosed areas, can cause asphyxiation.

Homeowners sued and later settled with the company.

One resident, Eric Roos, told the grand jury in 2019 that he wants to move, but can’t. “I don’t know who will buy my house now. How can I leave?” he said, according to the grand jury's report.

Dimock resident Ray Kemble, who has long publicly denounced Cabot and is currently battling it in court, welcomed the news that it faces criminal charges.

“I’m ecstatic, man. I feel vindicated now,” he told The Associated Press. Kemble, who says his water supply was ruined by Cabot, said he wants the company shut down.

The contamination in Dimock became the subject of fierce debate among pro- and anti-drilling forces. An Emmy Award-winning 2010 documentary, “Gasland,” showed residents lighting their tap water on fire. Drilling supporters have long accused Dimock residents of seeking money and attention.

The criminal charges against Cabot stem from a two-year grand jury investigation into Pennsylvania’s huge Marcellus Shale gas industry. Last week, Shapiro’s office announced a deal with another company, Range Resources Corp., Pennsylvania’s most active shale gas driller, to plead no contest to environmental crimes over its handling of contamination at a pair of well sites in the southwestern part of the state.

Unlike Range, he said, Cabot “continues to abdicate their responsibility.”

“Cabot knows what they’ve done. The residents of the commonwealth whose lives have been impacted know what Cabot has done. The game that Cabot continues to play, risking the lives of people across the commonwealth for a profit, well, that cannot go on any longer,” he said.