Stockpiling is expected to last for weeks, resulting in a boon for discounters and grocery stores as well as food delivery services, while also introducing logistical headaches. 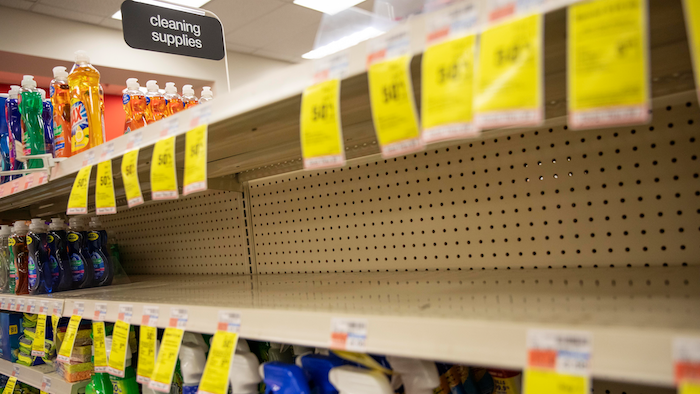 In this March 4, 2020 file photo, shelves where disinfectant wipes and sprays are usually displayed sit empty in a pharmacy in Providence, RI as confirmed cases of the coronavirus rise in the US. Legions of nervous hoarders are stocking up on canned goods, frozen dinners, toilet paper, and cleaning products. Such hoarding that's expected to last for weeks has created big challenges for discounters and grocery stores as well as food delivery services.
AP Photo/David Goldman, File

NEW YORK (AP) — As an Arizonan, Gregory Cohen has never had to stock up ahead of a hurricane or other natural disaster.

But fear of the new coronavirus has led the 51-year-old attorney to run up a hefty bill at the local grocery store last week on emergency supplies. That included 12 cans of diced tomatoes, 12 cans of chili beans, soap and six boxes of pasta that he says should last him and his family four weeks.

"My biggest concern is that we will all be asked to stay at home," said Cohen, who stored the supplies in tubs in his garage for his wife and teenage son. “This is my way of exerting control of the uncertainty of the current situation."

COVID-19, the disease that has sickened more than 100,000 people worldwide and killed more than 3,400 people, has created legions of nervous hoarders who are loading up on canned goods, frozen dinners, toilet paper, and cleaning products. Many like Cohen want to be prepared as they hear warnings about quarantines and watch a growing number of companies like Twitter, Microsoft and Amazon ask their employees to work from home.

Such stockpiling is expected to last for weeks, resulting in a boon for discounters and grocery stores as well as food delivery services that is also introducing logistical headaches at the same time. Costco Wholesale Corp.'s Chief Financial Officer Richard Galanti described the buying frenzy as "off the charts'' throughout the U.S. in a call with investors this week. Some like Kroger Co. are now placing limits on certain items such as cold and flu-related products to five each per order.

Target and Walmart say they are talking to suppliers to replenish bare shelves, but didn’t say how long that could take. And New Jersey-based Campbell Soup Co. said it's stepping up production because of increased orders from grocery stores and other retailers as demand started growing this week.

Instacart reports a surge in demand for pantry items such as powdered milk and canned goods, as well as personal care products like hand sanitizer and vitamins. Sales are up tenfold across the country but business is particularly heavy in California, Washington, Oregon and New York, where sales are up twenty-fold over the past week, the company said.

Meanwhile, sales of hand sanitizers in the U.S. more than doubled in the four weeks ending Feb. 29 compared to the same period a year ago, according to market research firm Nielsen, while sales of thermometers spiked 52.3% during that same period. Sales of dried beans spiked nearly 18%.

Online purchases of toilet paper have nearly doubled and non-perishable items like canned goods rose nearly 70% during the January and February period, according to Adobe Analytics.

Australian Chief Medical Officer Brendan Murphy, who is leading Australia’s response to the COVID-19 outbreak, on Thursday urged against stockpiling of toilet paper.

“There is no reason to denude the shelves of lavatory paper in the supermarkets,” Murphy said in a national televised press conference. “We should continue our normal activity.”

Italians engaged in panic buying in the first two days after officials in Lombardy and Veneto started to expand protective measures on Feb. 23 — closing schools, theaters and museums – but it subsided quickly after an initial spurt.

Supermarkets from the heart of Milan to provincial towns in Veneto were cleared of the Italian staple, pasta, but also such items as flour and meat, with butcher cases emptying on consecutive days. In one suburban mall supermarket, a customer with a shopping cart piled high with bottled water was told it exceeded limits being put in place.

Such hoarding resembles typical behavior in the days leading up to a hurricane or other natural disasters. Superstorm Sandy, the deadly hurricane that struck the Northeast in 2012, caused people to crowd stores to buy flashlights, batteries and food.

But what’s different about the hoarding around the coronavirus is that it's happening all across the country. Consumers are also dealing with an unknown threat and they have no idea when it will be over, consumer experts say.

“This is a big time of anxiety, and we know the biggest source of anxiety is uncertainty," says Stewart Shankman, professor of psychiatry and behavioral sciences at Northwestern University. "People are trying to get a sense of control by buying things you really don’t need. It's a false sense of control."'

"There's is not much guidance other than washing your hands,” Liebmann said.

With many store shelves cleaned out of necessities, shoppers like Christopher Chan are frustrated.

The 32-year-old lives in the Capitol Hill area of Seattle, a popular neighborhood with hip bars and restaurants east of downtown. He said Wednesday that it took him a couple days this week to find toilet paper, and that Whole Foods and QFC grocers had been cleaned out.

“After sleuthing around, I violated my own privacy standards and went to Amazon Go, which had one pack left,” he said.

To Chan, the panic buying squares with warnings everyone has been hearing about possible quarantines and he noticed dry goods like beans and rice were scarce, as were hand sanitizer and bleach. He saw one woman at a Whole Foods grabbing as many travel-size bottles of hand sanitizer as she could.

There could be some buyers' remorse if the coronavirus outbreak passes without forcing huge swaths of people to stay at home. That happened in 2011 after Hurricane Irene, which passed through the Northeast without inflicting much harm. The crowds who braved the long lines to buy batteries and canned goods then started to complain and demand refunds for all the stuff they bought.

Cohen said he's not worried about the extra supplies of food, including frozen burritos.