Koch has been an investor in the software company since 2017. 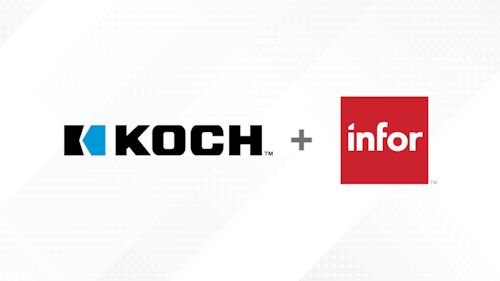 Infor, a provider of business cloud software, has announced that the investment and acquisition subsidiary of Koch Industries, Inc., has entered into a definitive agreement to acquire the remaining equity stake in Infor held by Golden Gate Capital. At the close of the transaction, Infor will become a standalone subsidiary of Koch Industries, and will continue to be operated by the company's current management team from its headquarters in New York City.

In addition to being a key enterprise customer, Koch has been an investor in Infor since 2017. Koch companies have made more than $26 billion in technology-related investments over the past six years to become a more global portfolio of businesses spanning multiple industries.

"Software is no longer an industry vertical; it is a disruptive layer that is transforming every facet of society," said Jim Hannan, executive vice president and CEO of enterprises for Koch Industries. "As a global organization spanning multiple industries across 60 countries, Koch has the resources, knowledge and relationships to help Infor continue to expand its transformative capabilities."

Infor has invested approximately $4 billion in product design and development to deliver industry-specific CloudSuites for over 68,000 customers around the globe. Infor's CloudSuites are cloud-native, industry-specific and built to help companies modernize. Infor's key industries include manufacturing, distribution, healthcare, retail and hospitality.

"Golden Gate Capital founded and began building Infor 18 years ago," said David Dominik, co-founder of Golden Gate Capital. "We are selling our remaining stake to Koch Industries, our partner in Infor for the past three years, because of the significant strategic value between Infor and Koch." The transaction is subject to customary conditions and regulatory approvals and is expected to close in the first half of 2020. Financial terms of the transaction were not disclosed.

Infor has 17,000 employees and over 68,000 customers in more than 170 countries,with customers that include:

Based in Wichita, KS, Koch Industries has estimated annual revenues of $110 billion, according to Forbes. It owns a diverse group of companies involved in refining, chemicals, biofuels, polymers, process and pollution control systems, electronics, software, minerals, automotive components, commodity trading and investments. Since 2003, Koch companies have invested nearly $105 billion in growth and improvements. With a presence in 60 countries, Koch companies employ nearly 130,000 people worldwide, with about 67,000 of those in the United States.