But what's it going to take to make it happen? 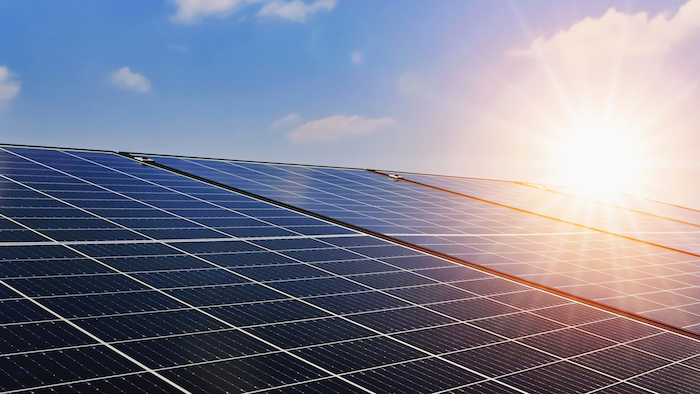 President Joe Biden has called for major clean energy investments as a way to curb climate change and generate jobs. On Sept. 8, 2021, the White House released a report produced by the U.S. Department of Energy that found that solar power could generate up to 45% of the U.S. electricity supply by 2050, compared to less than 4% today. We asked Joshua D. Rhodes, an energy technology and policy researcher at the University of Texas at Austin, what it would take to meet this target.

Why such a heavy focus on solar power? Doesn’t a low-carbon future require many types of clean energy?

The Energy Department’s Solar Futures Study lays out three future pathways for the U.S. grid: business as usual; decarbonization, meaning a massive shift to low-carbon and carbon-free energy sources; and decarbonization with economy-wide electrification of activities that are powered now by fossil fuels.

It concludes that the latter two scenarios would require approximately 1,050-1,570 gigawatts of solar power, which would meet about 44%-45% of expected electricity demand in 2050. For perspective, one gigawatt of generating capacity is equivalent to about 3.1 million solar panels or 364 large-scale wind turbines.

The rest would come mostly from a mix of other low- or zero-carbon sources, including wind, nuclear, hydropower, biopower, geothermal and combustion turbines run on zero-carbon synthetic fuels such as hydrogen. Energy storage capacity – systems such as large installations of high-capacity batteries – would also expand at roughly the same rate as solar.

One advantage solar power has over many other low-carbon technologies is that most of the U.S. has lots of sunshine. Wind, hydropower and geothermal resources aren’t so evenly distributed: There are large zones where these resources are poor or nonexistent. 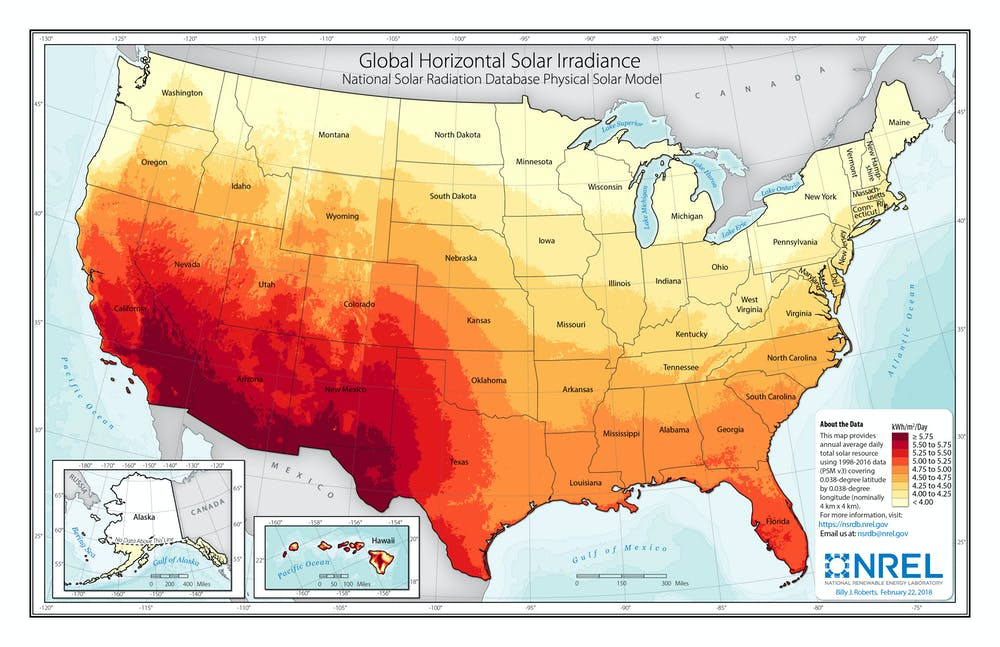 Most areas of the U.S. can generate at least some solar power year-round. This map shows annual global horizontal irradiance – the amount of sunlight that strikes a horizontal surface on the ground.NREL

Relying more heavily on region-specific technologies would mean developing them extremely densely where they are most abundant. It also would require building more high-voltage transmission lines to move that energy over long distances, which could increase costs and draw opposition from landowners.

Is generating 45% of U.S. electricity from solar power by 2050 feasible?

I think it would be technically possible but not easy. It would require an accelerated and sustained deployment far larger than what the U.S. has achieved so far, even as the cost of solar panels has fallen dramatically. Some regions have attained this rate of growth, albeit from low starting points and usually not for long periods.

The Solar Futures Study estimates that producing 45% of the nation’s electricity from solar power by 2050 would require deploying about 1,600 gigawatts of solar generation. That’s a 1,450% increase from the 103 gigawatts that are installed in the U.S. today. For perspective, there are currently about 1,200 gigawatts of electricity generation capacity of all types on the U.S. power grid.

The report assumes that 10%-20% of this new solar capacity would be deployed on homes and businesses. The rest would be large utility-scale deployments, mostly solar panels, plus some large-scale solar thermal systems that use mirrors to reflect the sun to a central tower.

Assuming that utility-scale solar power requires roughly 8 acres per megawatt, this expansion would require approximately 10.2 million to 11.5 million acres. That’s an area roughly as big as Massachusetts and New Jersey combined, although it’s less than 0.5% of total U.S. land mass.

I think goals like these are worth setting, but are good to reevaluate over time to make sure they represent the most prudent path.

What are the biggest obstacles?

In my view, the biggest challenge is that driving change on this scale requires sustained political will. Other issues could also slow progress, including shortages of critical solar panel materials like polysilicon, trade disputes and economic recessions. But the engineering challenges are understood and rather straightforward.

Natural gas, coal and oil provided almost 80% of primary energy input to the U.S. economy in 2020, including electric power generation. Replacing much of it with low-carbon sources would also require retooling most major U.S. energy companies. 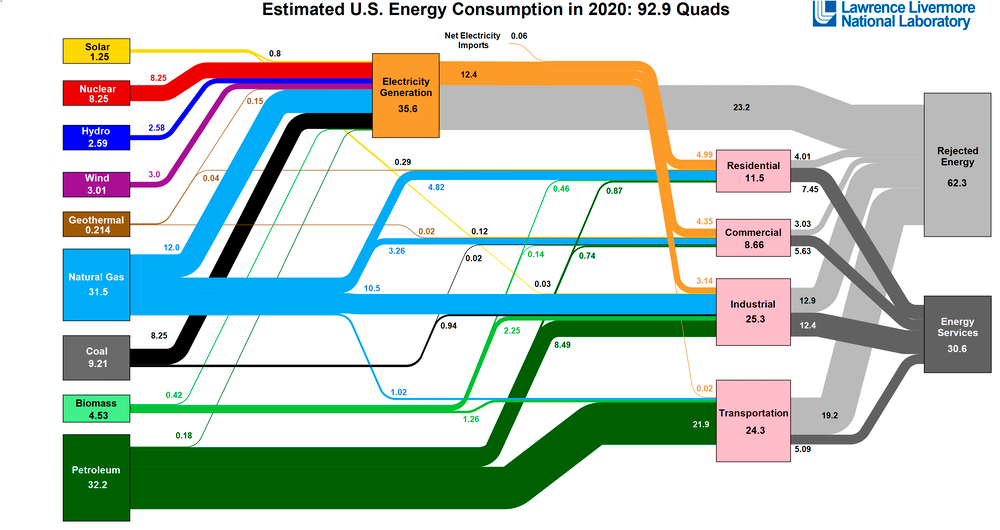 Shifting to a low-carbon economy would require generating much more energy from low- and zero-carbon sources and electrifying many activities now powered by fossil fuels.LLNL

Such a shift is likely to meet resistance, although some energy companies are starting to expand that way. The Biden administration plans to use the Clean Electricity Payment Program, a provision in the $3.5 trillion budget plan pending in Congress, to create incentives for electric utilities to generate more power from carbon-free sources.

Studies like this solar report also assume that a lot of supporting infrastructure that’s essential to fulfill their scenarios will be available. According to the Solar Futures Study, the U.S. would have to expand its electric transmission capacity by 60%-90% to support the levels of solar deployment that it envisions.

Building long-distance transmission lines is very hard in the U.S., especially when they cross state lines, which is what a massive solar deployment would require. Unless some agency, such as the Federal Energy Regulatory Commission, is empowered to approve new transmission lines, this kind of expansion might be almost impossible.

One potential solution is gaining traction: building transmission lines along existing rights of way next to highways and railroad lines, which avoids the need to secure agreement from numerous private landowners.

How would the current system have to change to support so much solar power?

Our power system currently gets about 59% of its electricity from coal and natural gas. These resources are generally, although not always, available on demand. This means that when utility customers demand more power for their lights or air conditioners, the companies can call on these types of plants to increase their output.

Moving to a grid dominated by renewables will require utilities and energy regulators to rethink the old way of matching supply and demand. I think the grid of the future will need much higher levels of transmission, energy storage and programs that encourage customers to shift the times when they use power to periods when it’s most abundant and affordable. It also will require much greater coordination between North America’s regional power grids, which aren’t well configured now for moving electricity seamlessly over long distances.

All of this is feasible and will be necessary if the U.S. opts to rely on a solar-heavy, decarbonized electricity grid to cost-effectively meet future demand.

This article is republished from The Conversation under a Creative Commons license. Read the original article here: https://theconversation.com/bidens-proposed-tenfold-increase-in-solar-power-would-remake-the-us-electricity-system-167605.