Ammonia’s many beneficial properties make it well-suited as a refrigerant in food and beverage processing and production, but the chemical is hardly without its risks. 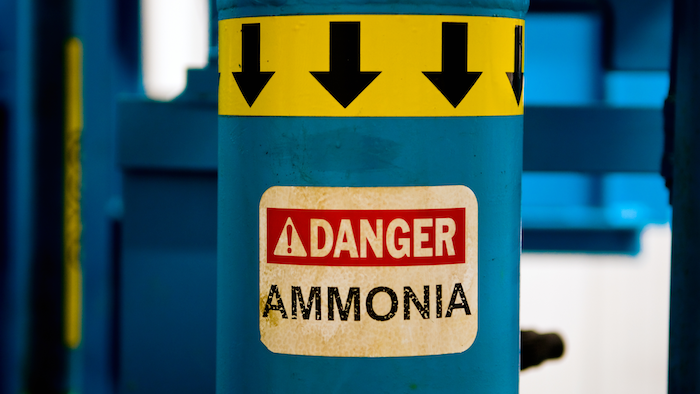 https://www.draeger.com/en-us_us/Applications/Products/Portable-Gas-Detection/Single-Gas-Detectors/Pac-8000Ammonia is a natural, efficient coolant, free of ozone depleting substances (ODS) — so it is not surprising that as environmental regulations increasingly limit the use of ODSs, ammonia has become a common default for industrial refrigeration.

Ammonia’s many beneficial properties make it particularly well-suited for use as a refrigerant in food and beverage processing and production, but the chemical is hardly without its risks. Not only can leaks do damage to equipment and facilities, but exposure to high concentrations of ammonia can be lethal to workers.

As recently as April 2019, 38 people were hospitalized outside of Chicago after a container holding ammonia leaked during transport. The leak resulted in a smoke-like cloud that caused those in close proximity as well as first responders to be overcome by the fumes.

Fortunately, such incidents are not an everyday occurrence, but for those whose job responsibilities include maintenance of refrigeration equipment, and particularly confined space entry (CSE), the potential for similar exposure to ammonia is an everyday concern. It’s critical, therefore, that food and beverage companies keep their employees safe by providing extensive training on the proper handling of ammonia and equipping their facilities and workers with gas detection devices and personal protective gear. 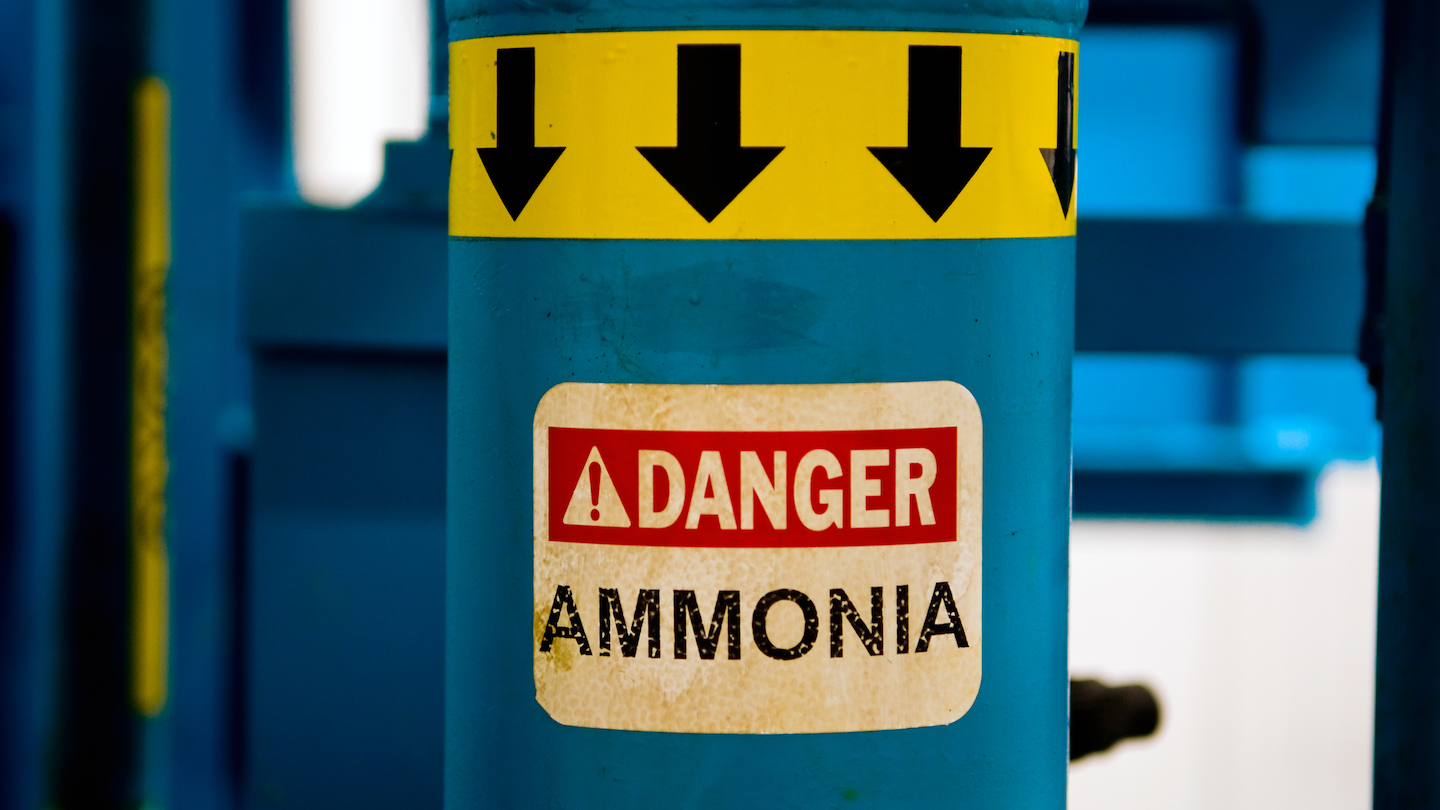 ShutterstockWay back in 1987, the Montreal Protocol on Substances that Deplete the Ozone called for developed countries to begin phasing out the production and use of Ozone-Depleting Substances. In 1990, as part of the United States’ commitment to the Montreal Protocol, Congress amended the Clean Air Act — the amendment, Title VI, called for the Environmental Protection Agency (EPA) to establish and implement regulations for managing ODS.

As part of the EPAs plan for managing ODS, the use of CFCs, including Freon, are being entirely phased out. In fact, by Jan. 1, 2020, the popular refrigerant will no longer be able to be produced in or imported to the United States. Further restrictions have targeted those less damaging refrigerants: hydrofluorocarbons. For food and beverage processing and production, complying with environmental regulations has meant finding alternatives to those once common coolants. Ammonia is quite literally a natural choice.

One atom nitrogen and three atoms hydrogen, ammonia, or NH3, is a prolific and popular natural refrigerant that has traditionally been used for food processing, storage and distribution — think meat-packing, dairies, breweries and other large food processing facilities where large refrigeration systems are required. That’s because in cooling systems larger than 200 tons, ammonia systems are less expensive to install and operate than other types of systems, including Freon.

Ammonia is a more efficient refrigerant than Freon because it has a higher latent capacity per pound. Freon can match ammonia’s refrigeration strength, but more pounds of Freon are required to do so. With ammonia, because fewer pounds of refrigerant are required to do the same amount of work, generally speaking, the lower a facility’s temperature requirements, the more cost-effective ammonia becomes.

While ammonia’s benefits are numerous, its dangers cannot be trivialized. Like many chemicals, the key concern is a leak. When ammonia becomes airborne, its molecules expand to form a heavy cloud of gas that hugs the ground and is slow to dissipate, thus increasing the odds of human exposure.

OSHA considers ammonia to be “a high health hazard” because it is corrosive to the skin, eyes, and lungs. Because ammonia is water soluble, the compound rapidly reacts with moisture in the body’s eyes, nasal passages, mouth, throat, and lungs. Mild symptoms of exposure include eye, nose and throat irritation. More severe symptoms include serious eye injury or blindness, chest pain, respiratory problems, wheezing, and pulmonary oedema. Needless to say, inhalation of high concentrations of ammonia can lead to asphyxiation and death.

The extent of injury caused by exposure to ammonia is not only dependent on concentration levels — the length of exposure is also a factor. Low airborne concentrations and diluted liquid solutions can still cause eye, nose and throat irritation, serious skin burns similar to frostbite and permanent eye damage.

While not a significant concern, ammonia can be flammable at concentrations of 15-30 percent by volume in air. Also, in an enclosed space, ammonia can explode if an ignition source is introduced.

Ammonia is classified as a hazardous chemical, so the federal government has mandated that it be subject to Occupational Safety and Health Administration's (OSHA) Process Safety Management Rules (PSM) as well as the EPA’s Risk Management Program Rules (RPM). That simply means businesses have to comply with the programs’ rules and maintain the proper paperwork to satisfy the feds when they show up. 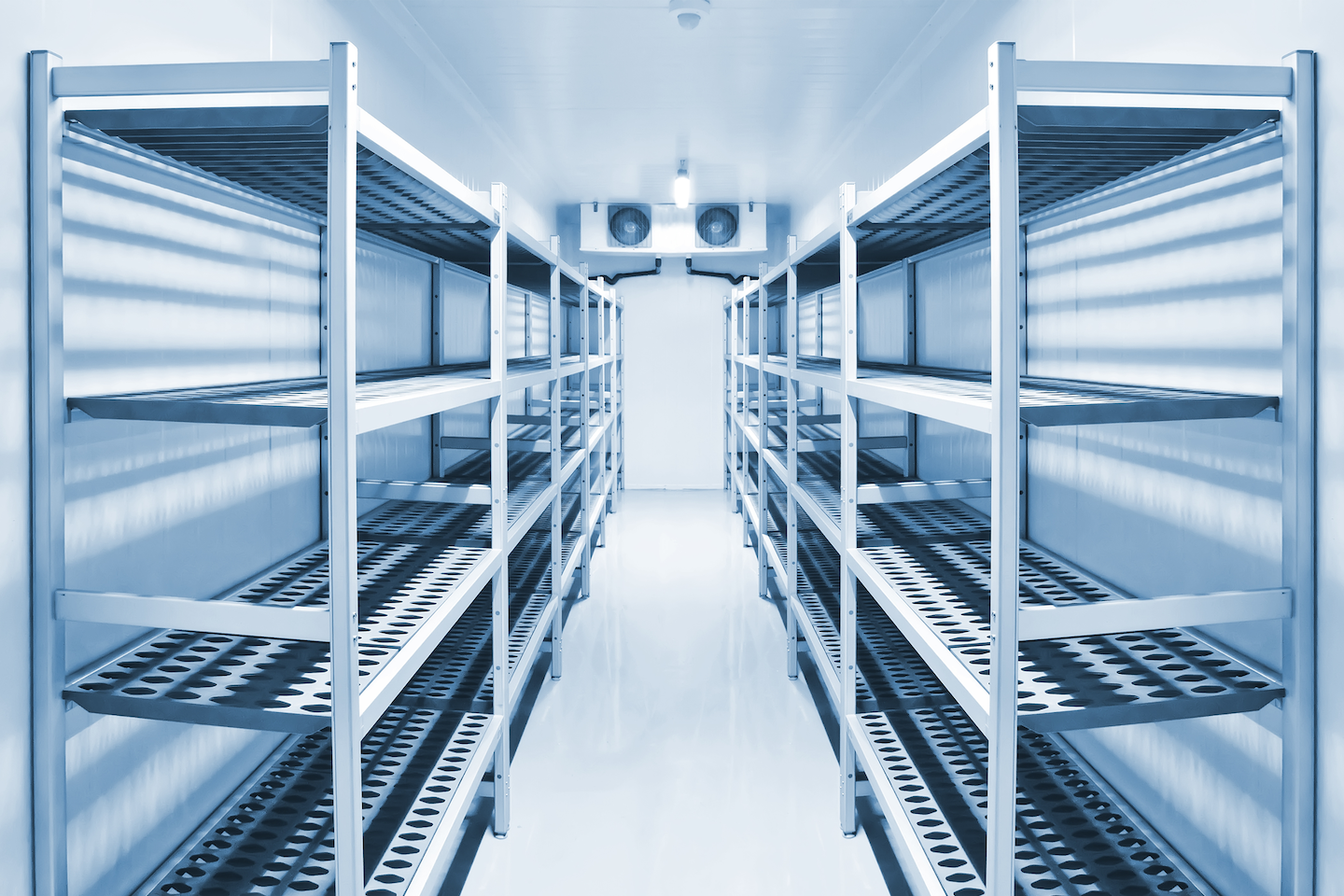 Because commercial refrigeration units are closed-loop systems, workers in the food industry are not typically exposed to ammonia on an on-going basis. Outside of an accidental release of ammonia, the potential for exposure to high concentrations of ammonia is greatest during confined space entry.

According to OSHA, a confined space consists of three elements: the space is large enough for an employee to enter and perform work; it has limited or restricted means for entry or exit; and it is not designed for continuous occupancy. Although not every confined space is hazardous, more than a thousand workers have died in confined spaces in the past decade. The introduction of drones and robotic technology to CSE promises to reduce that number in future decades, but for now, confined space entry continues to be a necessary aspect of industrial operations.

In the food industry, OSHA protocols dictate inspecting and maintaining the integrity of ammonia refrigeration units and that often calls for workers to enter confined spaces. Technically speaking, the moment a worker breaks the plane of an opening, he or she has in fact entered a confined space, and when ammonia is involved, workers should assume that confined space presents a hazardous environment.

Given ammonia’s potential dangers, it is imperative that employees be well-prepared and properly equipped when working around the chemical. Preparation should entail a comprehensive safety management plan as well as a thorough emergency response plan. (Countless accidents and injuries occur during rescue efforts, not just the initial Confined Space Entry.)

Both plans should include the use of gas detection devices and personal protective equipment (PPE). In the event of a leak or CSE procedure, it would be a mistake to assume that ammonia’s distinct odor would serve as an adequate warning signal. Those who regularly work around ammonia can experience olfactory fatigue, or desensitization, making ammonia’s sharp odor nearly impossible to detect.

A fixed gas detection device can accurately measure the concentrations of ammonia at a specific location and can quickly alert workers of changes in air quality. When paired with a controller, devices can even be programmed to automatically shut down operations if air quality reaches dangerous levels. Dräger’s Polytron® Series of fixed gas detection devices along with the company’s REGARD 7000 controller is one such solution. 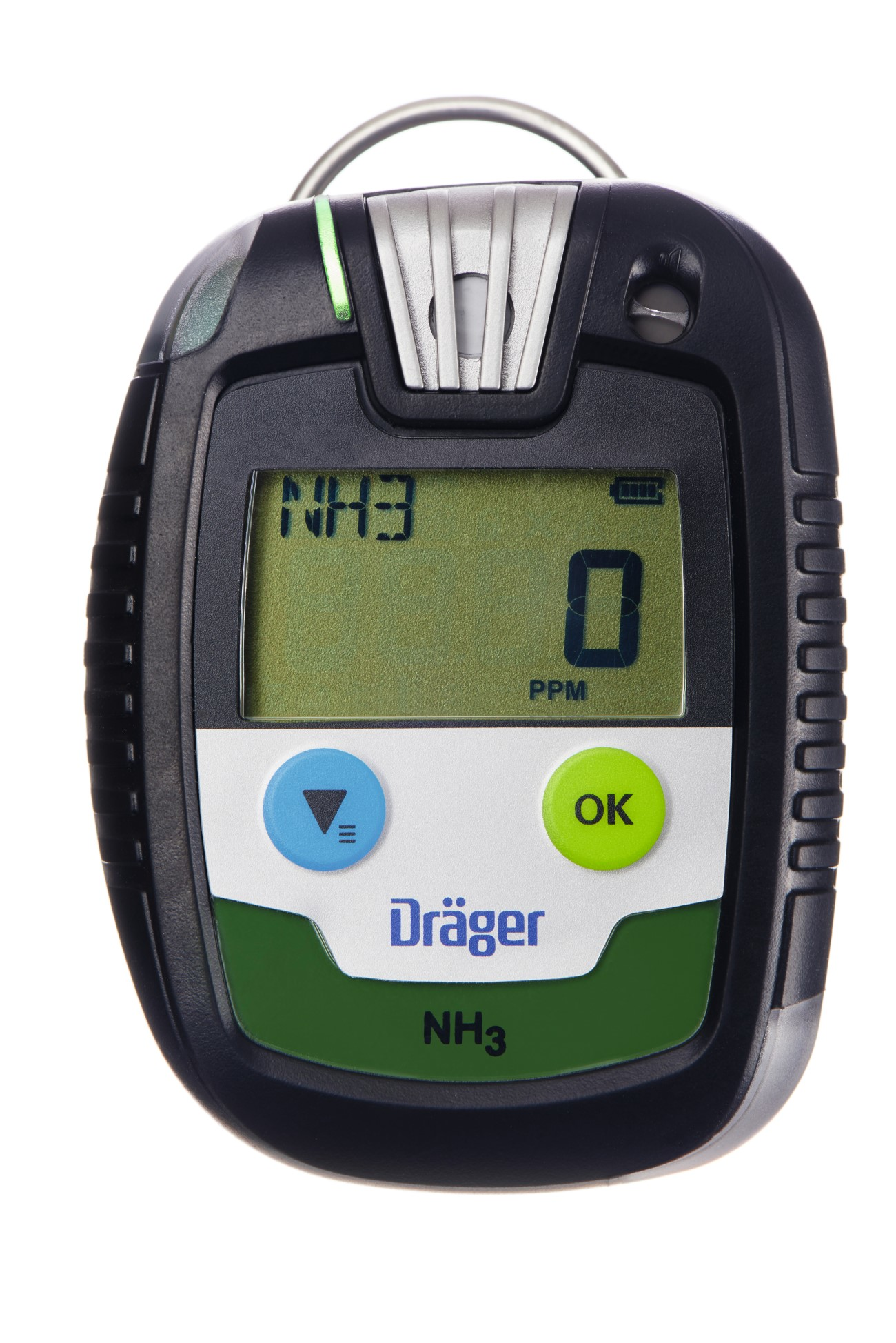 The Dräger Pac 8000 is a non-disposable, personal single-gas detection device.DrägerPortable gas detection devices can be used to measure various toxic gases and vapors in various spots around a plant or facility. Some portable gas detectors are similar to test tubes — these convenient and reliable tubes use a manual or automatic pump to collect air samples. Measurement results can easily be read by observing color changes on a scale printed on the tube.

Other more sophisticated portable devices are designed solely for the detection of ammonia. If this particular detector senses hazardous concentrations of ammonia, it sets off audible, visual, and vibration alarms. The Pac 8000 can also withstand extreme conditions, including temperatures as low as -40 degrees Celsius/Fahrenheit and pressures as high as 1,300 mbar.

While detection devices are essential for monitoring conditions and signaling warnings, in the event of an incident, it is a worker’s PPE that helps protect them from serious injury. Because ammonia reacts to moisture, it is important for workers to protect the eyes, nose and mouth from contact. In some cases, goggles and a face shield can be used, while a full-face respirator may be warranted for riskier applications. Never wear contact lenses when handling ammonia — they can trap the gas and the contacts will freeze to the eye.

More intensive applications may call for a Self Contained Breathing Apparatus (SCBA). These robust, high-performing devices are light, easy to wear and provide workers access to a safe, clean supply of air. There are numerous SCBA products on the market, each with their own unique features and benefits. Some are designed for comfort and ease of use, while other designs are more appropriate for CSE or emergency response. As hydrochlorofluorocarbons continue to be phased out, the use of ammonia as a refrigerant in food processing and production can be expected to increase. For facility managers, ammonia need not be scary — its benefits far outweigh its risks. The key to safety is simple and straight forward. First, ensure crews are knowledgeable and well-trained in handling the chemical. Then, have their backs with proven gas detection technologies — fixed and portable gas detection devices. And lastly, equip them with the proper personal protective equipment.

Dräger is an international leader in the fields of medical and safety technology. Our products protect, support and save lives. Founded in 1889, Dräger generated revenues of around EUR 2.6 billion in 2018. The Dräger Group is currently present in more than 190 countries and has more than 14,000 employees worldwide. Please visit www.draeger.com for more information.