A New Union Election At VW, This Time Without The Furor

The vote is scheduled for this week at the Volkswagen plant in Tennessee. 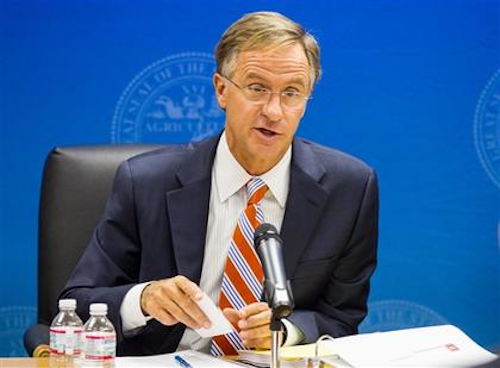 A new union vote is scheduled for this week at the Volkswagen plant in Tennessee, but so far it's been largely devoid of the public threats, promises and handwringing that surrounded last year's election at the factory.

The United Auto Workers union was narrowly defeated in last year's election among the entire blue-collar workforce at the factory. The union is taking a more limited approach this time in seeking to represent just the 165 skilled-trades worker, or about 12 percent of the plant's 1,400 hourly workers. The two-day vote starts on Thursday.

In the run-up to the 2014 vote, state lawmakers warned that state tax credits could be threatened if the union won the election. And U.S. Sen. Bob Corker, the Tennessee Republican who earlier declared that Volkswagen would become a "laughingstock" in the business world for not doing more to fight off the union, proclaimed that Volkswagen would quickly announce a decision to build a new SUV at the plant if the UAW was defeated.

While Volkswagen publicly denied that there was a link between the union vote and the plant expansion decision, union supporters argued that the GOP officials' statements had a chilling effect on workers who worried about the plant's future if the new vehicle wasn't produced there.

As it turned out, Volkswagen announced the new SUV would be produced in Chattanooga five months after the vote.

Republican Gov. Bill Haslam sent a letter to Volkswagen leadership at the plant before the 2014 vote, urging the company to change its policy of allowing the UAW to campaign inside the factory and questioning whether a UAW win would have been accepted within the community.

But Haslam is now largely limiting his criticism to the timing of the new vote, which is being held as Volkswagen grapples with the fallout from its admission that it rigged diesel vehicles so they would pass U.S. emissions tests.

"Volkswagen has some bigger concerns going on right now, so our conversations with Volkswagen have mainly focused on that," Haslam told reporters on Monday. "If you're really concerned about the company and the success of the plant, is this the right time to do that?"

One reason for the more tepid response from Republican critics of the UAW could be that while Volkswagen took a more positive stance toward the union in 2014, it has aggressively opposed the vote by the subset of workers at the plant this week.

Volkswagen unsuccessfully sought to block any vote short of a full election by all blue-collar workers, and hired attorneys from a law firm that specializes in "strategies for lawful union avoidance" to make its arguments to the National Labor Relations Board.

That move has been criticized by Gary Casteel, the UAW's secretary-treasurer, as a departure from Volkswagen's "core principles," which include formal labor representation at all of the companies' factories in the world — except for the Chattanooga plant.